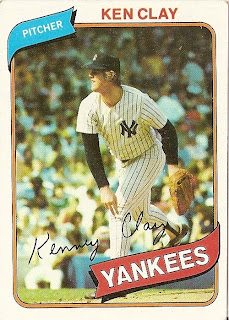 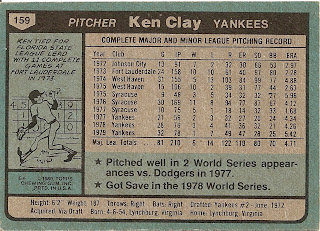 Who is this player?
Ken Clay, relief pitcher, New York Yankees
After spending most the 1980 season in Triple-A Columbus, the New York Yankees traded Ken Clay to the Texas Rangers in August for pitcher Gaylord Perry. As a starter in Columbus, the righthanded Clay won nine games with a 1.96 before his trade. He started eight games with the Rangers, and was victorious in his 1980 debut. Ken finished the year with a 2-3 record and 4.60 ERA. At season's end, Clay was part of a multi-player trade that found him a member of the Seattle Mariners.

A graduate of E.C. Glass High School in Lynchburg, Virginia, the New York Yankees made Clay their second selection in 1972 draft. He toiled for five years in the Yankees minor league chain where he suffered bouts of wildness and inconsistency. In two years at the Triple-A level (Syracuse), Clay walked 94 hitters in 217 innings and posted a 4.50 ERA.

Clay started the 1977 season exceptionally well, winning five with a 1.68 ERA and he finally earned his big league promotion. He spent the rest of the season on the Yankees pitching staff, appearing in 21 games. New York, meanwhile, advanced to the World Series in 1977 and Clay appeared in two games as the Yankees won their first title since 1964. Ken was again on the Yankees roster for the 1978 season appearing both in relief and occassionally starting. The Yankees repeated as World Series champions with Clay earning another championship ring and appearing in both the ALCS and Series.

He split time between starting and relieving in 1979, and at seperate times was used as replacements for Catfish Hunter and Rich Gossage when both were injured. In both instances, he did not pitch well, going 1-7 with a 5.40 ERA. These performances, along with his outings in Spring Training 1980 led to his return to the minors and ulitmately, his last appearance with the Yankees. His New York teammates did not speak kindly of Clay with Hunter saying he had "great arm, great slider, bad brains." Sparky Lyle also wrote dirisively of Clay in "The Bronx Zoo."

1981 would be Clay's fifth and final season in the majors, going 2-7 with a 4.63 ERA. In his final appearance, he started and defeated the Toronto Blue Jays on the final weekend of the season. He was released at the end of Spring Training in 1982. Clay's post-baseball career has been troublesome. He has been arrested and jailed numerous times, ranging from drunken driving to theft.

Why I love this card
Clay's signature on this card is "Kenny Clay." Don't ask me why, but I always thought that it was neat when the signature on the card didn't match the name that was "officially" listed. Also, it seemed as if all of the Yankee cards in the 1980 set showed them in their classic home pinstripes. While I'm not a Yankee fan, if you are going to show them, show them at home.

Something else....
I probably should have added a label in this blog that somehow indicates players who have been arrested or jailed, as their seems to be an inordinate amount so far. In addition to Clay, there has been Lary Sorenson, Ron LeFlore, Matt Keough, Sammy Stewart, Willie Wilson, Fran Barrios and Derrel Thomas. I have to check back and see if there are more but it seems like there have been a lot.
Posted by Dean Family at 11:43 PM