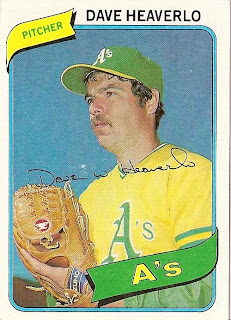 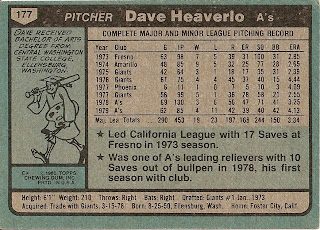 Who is this player?
Dave Heaverlo, relief pitcher, Oakland A's
The A's sold the righthanded Heaverlo to the Seattle Mariners on Opening Day 1980. He arrived to the Kingdome in the fifth inning, entered the game in the eighth and earned the save. Despite being one of Oakland's better pitchers, he was shipped out primarily due to his outspoken nature as the A's player representative. He complained about the A's front office and travel schedule and he returned to his native Washington as the Mariners setup man. He set the Seattle club record (since broken) for appearances in 1980 with 60.

Beyond the statistics, Dave Heaverlo's career is marked by words like "colorful" and "jokester." He was one of the first players ever to shave his head, unheard of a generation ago. You can see that slightly here and here. He also kept the number 60 that he recevied as a non-roster rookie throughout his major league career. According to Heaverlo's profile, the 1980 Complete Handbook of Baseball said:

Grew weary of listening to "funeral home music" on Oakland Coliseum public address system so he took matters into his own hands and changed the station on a transistor radio he found sitting, unattended, in front of the open microphone."

However, Heaverlo was an outstanding athlete. A prodcut of Central Washington University, he was a first round draft pick of the San Francisco Giants in the 1973 amatuer draft and as a professional was used exclusively as a relief pitcher. His outstanding performance in the minors earned a quick ticket to the major leagues and he made his debut in 1975. He became a fixture in the Giants bullpen for three seasons, averaging 53 appearances a season and compling a 3.11 ERA. He was one of the key players in a multi-player package the Giants sent to Oakland for Vida Blue.

In Oakland, Heaverlo assumed the role of closer on a truly terrible A's team that lost 201 games in two seasons. He unfairly garned a reputation of being unable to hold a lead, but appeared in 60+ games in both years and having one of the best ERAs on the team. In Seattle he cemented his reputation as a clubhouse comic with a series of wigs and ghoulish masks. However, he was released during Spring Training in 1981, primarily due to a personality conflict with manager Maury Wills. He signed on with the A's again, but lasted only six games in the final season of his 7-year big league career.

Away from the game, Heaverlo has stayed in his native Washington as a radio show host and color commentator for Central Washington Football. He also serves as pitching coach for the Big Bend Vikings in Moses Lake, Washington.

Why I like this card
I have mentioned the 1980 Complete Handbook of Baseball in other posts. This book provided a perfect compliment offering a bit more substance to these players. The entry above about Heaverlo makes me laugh as much now as it did then. It was how I recognized Heaverlo when I finally got this card late in the year. Can you imagine a major league team today with a microphone up to a transistor radio? Great stuff. A little disappointed that his head isn't shaved in the photo, though.

Something else....
Here's how truly terrible the A's were in the final days of Charlie Finley. When he traded his last marketable star, Vida Blue, he received seven players in return from the Giants. By the time these cards were out a little more than three years later, none of them were still with the A's. Granted, none of them became superstars, but not even one of them stuck? Sheesh. And with that, all of the players in the Vida Blue trade have now been featured. It will not be mentioned again. Really.
Posted by Dean Family at 11:41 PM