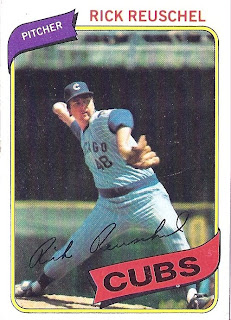 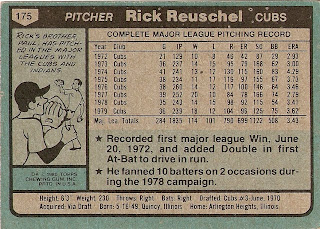 Who is this player?
Rick Reuschel, starting pitcher, Chicago Cubs
The mainstay of the Chicago Cubs pitching staff, "Big Daddy" had just completed eight consecutive seasons of at least ten or more victories. He was the Cubs starting pitcher on Opening Day, the third season in a row he was given that honor. 1980 was inconsistent for Reuschel as the Cubs struggled in the standings. Rick found a groove in midseason, winning six games in a row and lowering his ERA by a full run. He finished the campaign with an 11-13 record and led the league in games started and was fourth in innings pitched.

The righthander first gained attention by going 10-0 with a 1.29 ERA at Western Illinois University and was drafted by the Chicago Cubs on the third round of the 1970 draft. He quickly became the best pitcher in the Cubs farm system and was promoted to Chicago at midseason in 1972. In an era where the Cubs rarely finished in the first division, Reuschel was the team's most reliable and durable pitcher. He would win 131 games in his first stint on the North Side, being named an All-Star in 1977. That would also prove to be his best season, winning 20 games and finishing third in the Cy Young Award voting.

Despite his appearance, Reuschel was a tremendous athlete. He was an excellent fielder and smart baserunner that was often used to pinch run. He also could handle a bat fairly well for a pitcher, several times batting over .200 for the season. He was also briefly teammates with his brother Paul, and the two teamed up to shutout the Los Angeles Dodgers in 1975. In 1981, with the Cubs and Reuschel struggling, Rick was traded to the New York Yankees where he received his first taste of postseason action. He appeared in two games of the 1981 World Series, but the Yankees dropped the Series to the Los Angeles Dodgers.

The wear of all those innings in Chicago took their toll and Reuschel lost the entire 1982 season with a torn rotator cuff. He was released by the Yankees the following year but was determined to return to the major leagues. He returned to the Cubs very briefly, but wasn't used often and was released again. He latched on with the Pittsburgh Pirates where he experienced a renaissance, despite the Pirates being the worst team in baseball. He won 31 games in two and a half years, and was Comeback Player of the Year in 1985. He was also named an All Star in 1987 and won a Gold Glove in 1985.

Reuschel was traded again, this time to the San Francisco Giants at the trading deadline in 1987 and he helped the Giants reach the NLCS. He won 19 games in 1988 and again led the league in games started. The following year the Giants, led by Reuschel, won the NL West and this time advanced to the World Series. Rick was honored by being appearing on the cover of Sports Illustrated and was named starting pitcher for the National League in the All-Star Game. Rick spent two more seasons in San Francisco before his 19-year career ended in 1991. Today, brothers Rick and Paul tend to their farm in Quincy, Illinois.

Why I love this card
I always pronounced his name "Roo-shell" when I was a kid. Through the magic of Retrosheet.com, I am pretty sure that the photo on this card was taken on Sunday, July 15, 1979. This appears to be Riverfront Stadium and this was the only day game Reuschel appeared in that year. Retrosheet sure would have settled several arguments regarding our cards a lot quicker had it been around in 1980.

Something else....
There is a great story about Reuschel and the Phillies Larry Bowa at his Wikipedia entry here. It is definitely worth the read. In the age of Baseball Tonight and cameras at every game, even if this story is embellished the fact that no footage of this exists for multiple review just adds further luster to the story.
Posted by Dean Family at 11:25 AM