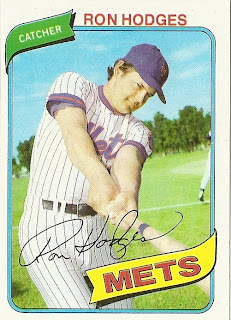 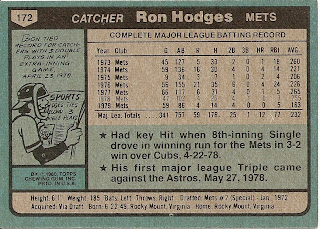 Who is this player?
Ron Hodges, reserve catcher, New York Mets
As the third string receiver on a Mets team that lost 95 games in 1980, Hodges started only nine games and batted only .238 in 54 at bats. He was known primarily for his defensive prowess and often times served as a late inning replacement. His pinch-hit RBI single against the defending World Champion Pirates in June won an 11-inning thriller at Shea in a season highlight. A separated shoulder suffered in early July prematurely ended 1980 for Ron and he spent the remainder of the season on the disabled list.

Mostly a backup throughout his 12-year major league career, the lefthand hitting Hodges was drafted by the Mets in 1972 out of Appalachian State University. Hodges was called up quickly in June 1973, when Jerry Grote, Duffy Dyer & Jerry May all went down with injuries. He established himself quickly with the pitching staff and contributed to the Mets' stretch drive to the NL East title. He made the 1973 postseason roster and pinch hit in Game 1 of the Series, drawing a walk in his only appearance.

Hodges averaged 56 appearances a season with the Mets and was a backup to a string of Mets catchers, from Jerry Grote to John Stearns to Alex Trevino. He batted a career high .265 in 1977 and began to receive more playing time as his career reached its later stages. In 1983, he was finally rewarded with the Mets full-time starting catching position, appearing in 110 games. He started on Opening Day and hit .260 for the season but returned to bench duty in 1984, his final season in the majors.

In 1981, Hodges was involved in two bizarre incidents. First, he fractured the rib of teammate Craig Swan when he hit Swan with a throw trying to throw out Tim Raines. Later that year, he was suspended by Mets' manager Joe Torre when he refused to leave a Montreal bar.

Why I love this card
On the cartoon on the back of this card, Hodges is depicted as reading the newspaper in his catching mask. In my nine year old mind, I could totally picture a major league catcher sitting around reading the newspaper, watching TV or having his morning cereal with his mask on. Completely plausible and I laugh at the memory now.

Something else....
Hodges was the only bridge between the "You Gotta Believe" Mets and the eventual World Champions of 1986. His career began with Tom Seaver and Willie Mays as teammates before dipping to five last place finishes and seven 90+ loss seasons. In his final year, his teammates were Dwight Gooden and Darryl Strawberry.
Posted by Dean Family at 11:43 PM