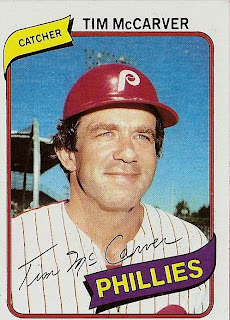 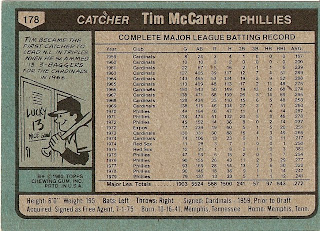 Who is this player?
Tim McCarver, reserve catcher, Philadelphia Phillies
As the 1980 season began, Tim McCarver had already announced his retirement from baseball and had moved to the Phillies broadcast booth. Although he announced his retirement in October 1979, Topps interestingly made a regular issue card of him for this set (but no Lou Brock?) In September, the Phillies activated McCarver primarily so that he could become the 11th player in major league history to play in four decades. The lefthanded batting McCarver appeared in six games and had a two-run double in the final game of his 21-year career.

It is ironic and fairly fitting that Tim McCarver is the subject of today's post. As I type this, Game 1 of the 2009 World Series is being played and McCarver is covering his 20th Series, the most by any broadcaster. He is equally respected and reviled by fans and critics alike and have become one of the dominant voices of the game during this generation. He has covered the game on four networks and has been present at nearly every historic postseason event of the last 25 years.

When I first got this card, however, McCarver was just an old guy at the end of his career. There was no real inkling of what was to come later, just what he had accomplished. He broke in as a 17-year old in 1959, appearing in eight games for the 1959 St. Louis Cardinals. He eventually assumed the starting position behind the plate in 1963 and he was a key member of the the two-time World Champion Cardinals of the mid-1960s. A very complete biography of McCarver can be found here.

McCarver's playing days have been overshadowed by his broadcasting career. An offensive threat in an era where that was uncommon for a catcher, McCarver was a two-time All-Star that was the MVP runner up in 1967. He led the league in triples in 1966 and batted .275 during his first 11 years as Cardinal. When the 1970 season ended, McCarver was part of the Curt Flood-Dick Allen trade and went to the Philadelphia Phillies. McCarver bounced around during the early 1970s, playing for four teams in six seasons (Phillies, Cardinals again, Expos and Red Sox).

He returned to the Phillies in 1976 and served primarily as Steve Carlton's personal catcher. McCarver signed a unique contract after the 1976 season. He was offered a job as broadcaster for the Toronto Blue Jays, but the Phillies countered with an offer to stay on as a player then have two years as a broadcaster after the 1977 season, he played until 1979 when he became the Phillies broadcaster. In addition to his national duties, McCarver has served as analyst for the Mets (1983-98), the Yankees (1999-2001) and San Francisco Giants in 2002. Away from baseball, he hosted the 1992 Winter Olympics and hosts the syndicated "Tim McCarver Show."

Why I love this card
At the time, I was only familiar with McCarver simply because he made the last out of the 1968 World Series. In Detroit, the highlight film of that Series was shown often during rain delays or at other points during the season both on TV and at Tiger Stadium. I didn't have an appreciation for him as a All-Star caliber player, simply a guy who played with Lou Brock and Bob Gibson.

Something else....
Where to begin with McCarver....

Or Deion Sanders dunking him after the 1992 NLCS when McCarver criticized "Prime Time" for simultaneously playing for the Braves and Falcons.....

Or the recent post by our friends at Dinged Corners. Perfect for Halloween. Listen to how scary this is here......

I'll go with this little selection on Youtube. Ten seconds of pure goodness.
Posted by Dean Family at 9:38 PM