Over the last two weeks, I have been recovering after being struck with the PC Defender computer virus. It incapacitated my computer and attempted to steal my identity (unsuccessfully).

It was a real wake up call to how screwed you can be if you lose your on-line part of your life, this blog notwithstanding. I lost all ability to stay ahead of the curve at work, been missing out on the kid's school stuff (since it's all on line too) and just general entertainment.

My initial estimates for repair ranged from 200-300 bucks and there was no way I was going to spend that much. I began looking for a new computer until a co-worker from the tech department offered to help. Since I was on his time (and for free), I had to take what I could get. I just got the box back yesterday evening.

I am in the process of repopulating all the files that were able to be saved and uncorrupted. I am reloading all of the old programs that had to go as a result of the restart. I'm also in the middle of baseball practice, Cub Scouts, doctor's appointments, school conferences, parent organizations and not to mention family time.

I hope to resume posting again shortly. Thanks for your patience.
Posted by Dean Family at 1:29 PM 2 comments: 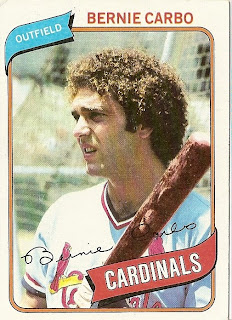 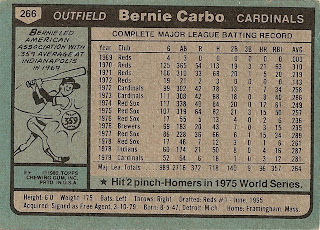 Who was this player?
Bernie Carbo, reserve outfielder, St. Louis Cardinals
By the time the 1980 season had ended, Bernie Carbo had completed a very interesting season. The lefthand hitting veteran began the season with the St. Louis Cardinals, appeared in only 14 games and was released on May 28th after batting just .182. When he failed to land a job with another major league club, he became a hairstylist in his native Detroit. The Pittsburgh Pirates signed him for the stretch drive, and he appeared in seven September games, batting .333. When the Pirates released him on October 8, his seven year major league career had come to an end.

As a highly touted prospect, Carbo was selected on the first round of the 1965 amatuer draft by the Cincinnati Reds, ahead of longtime Royal Hal McRae and future Hall of Famer Johnny Bench. He was with the Reds by 1970 and posted career highs in several offensive categories. Carbo helped lead the Reds to the World Series and was selected Rookie of the Year by The Sporting News. He was involved in one of the more controversial plays in Series history, when he was called out at home plate by umpire Ken Burkhart as Burkhart had his back to the play.

However, Carbo was unable to maintain the momentum of his strong rookie campaign. In recent years, he has claimed that he initially became addicted to speed in Cincinnati and that invariably led to other drugs. In Carbo's words:

I was introduced to cocaine in 1973. So from 1973-80, I was taking Dexedrine, Benzedrine, Darvons, sleeping pills, smoking dope, drinking beer, doing cocaine, and chasing women, and I never played a day without it.

He never again fully achieved full-time playing status and moved to several teams throughout his 12-year career: Cincinnati, St. Louis, Boston, Milwaukee, Cleveland, St. Louis and Pittsburgh. It was with the Red Sox, though, where Carbo achieved his greatest fame and made his deepest connection with fans. His pinch-hit home runs in the 1975 World Series endeared him across New England and when he was shipped out of Beantown in 1978, it was seen as a dramatic blow to the team's psyche.

After retiring, Carbo became a born-again Christian and stopped using drugs and alcohol. In 1993, he founded Diamond Club Ministry in an effort to aid and instruct youth. He was the manager of the independent Pensacola Pelicans for three years (2003-05) and was elected to the Red Sox Hall of Fame in 2004. He is also currently active with the Red Sox Alumni Association.

Why I love this card
In 1980, I knew nothing of Carbo's pinch-hit homers, his drug use or the play at the plate in the 1970 Series. All I knew was that Bernie Carbo had one awesome afro. My Mom thought that he looked like Art Garfunkel. Yes, I knew who Bernie Carbo was before I knew who Art Garfunkel was.

Something else....
I thought that it was ironic that the Carbo story made the rounds this week with a post on him upcoming. At first, I thought it was an April Fool's joke making the rounds on the internet, but apparently Carbo has been quite open about his addiction for some time. I still wish I could find more information about his time as a hairdresser.

On this date in 1980:
The Grateful Dead appeared on Saturday Night Live. You can watch a snippet of the show here. There's a brief mention of the Pirates in there and the start of the 1980 season.
Posted by Dean Family at 10:13 PM 1 comment: 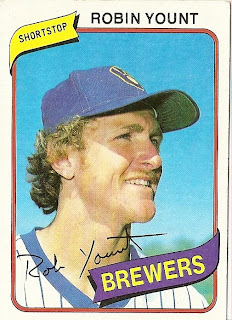 On this date in 1980:
As Spring Training came to a close, the Milwaukee Brewers released catcher Ray Fosse. The 32-year old Fosse had been trying to stay in the majors as a backup catcher but instead, his star-crossed career came to an end.
Posted by Dean Family at 9:01 PM 2 comments: