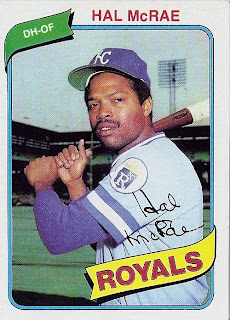 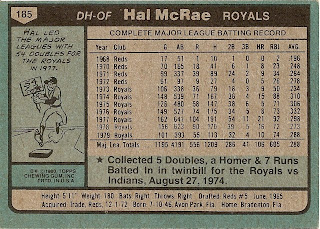 Who is this player?
Hal McRae, Designated Hitter, Kansas City Royals
As one of the first players to make a career as a designated hitter, Hal McRae was a significant part of the attack of the AL Champion Royals in 1980. Typically the team's cleanup hitter, he tore a calf muscle early in the season and missed most of May. He rebounded to hit .297 with 83 RBI, a highlight being a five-hit game in August. He batted .375 in the World Series against the Phillies, but the Royals fell to Philadelphia in six games. At the end of the season, Hal was recognized as Designated Hitter of the Year.

The first major leaguer to hail from Florida A&M, McRae was a sixth round selection of the Cincinnati Reds in 1965. While McRae always showed an ability to hit, a broken leg in 1969 limited his fielding abilities and prevented him from becoming a full-time player. Nevertheless, Hal made his debut with the Reds in 1968 and twice played in the World Series with the Big Red Machine. In the break that would define his career, McRae was traded to the Royals in December, 1972.

McRae struggled in his first season in Kansas City, but rebounded to hit .316 over the next three seasons (1974-1976) and the Royals won the AL West for the first time. Hal was an MVP candidate and recognized as an All-Star in 1975 and 1976. He was among the leaders in batting and finished second in a close race with teammate George Brett in 1976. In an ugly incident, McRae charged racism when Brett narrowly edged out McRae on the final day.

He developed a well-earned reputation as a hard-nosed, intense player that came to signify the Royals of that era. Still among the franchise leaders in many offensive categories, McRae twice led the league in doubles and was the AL RBI champion in 1982. The Royals qualified for the postseason in 1981, 1984 and in 1985 the team won their first World Championship. McRae played in nine post-season series with the Royals and was a .294 hitter in the playoffs. His last season was 1987 after 19 seasons in the major leagues.

Following his playing retirement, McRae managed the Royals (1991–94) and Tampa Bay Devil Rays (2001–02). He also served as hitting coach for the Cinncinnati Reds, Philadelphia Phillies, and St. Louis Cardinals. Recently, McRae was in the news as he was fired as Cardinals hitting coach and replaced by Mark McGwire.

Why I love this card
The older kids in the neighborhood could always get the little kids to believe anything based solely on the fact that they were older. In 1980, I was on the receiving end of this spectrum and Hal McRae reminds me of this. While I am not certain of McRae's ancestry, the older kids had me convinced that he was of Irish decent because "anyone with 'Mc' in front of their name" is "definately" Irish. I think that my parents let me figure that one out for myself.

Something else....
No matter what, whenever I think of Hal McRae, I will always think of this. If it's not the best tirade ever, I would like to see the one that is.
Posted by Dean Family at 11:13 PM