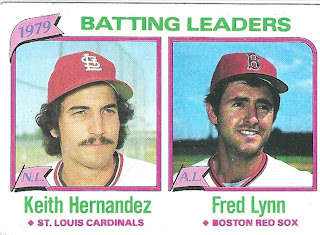 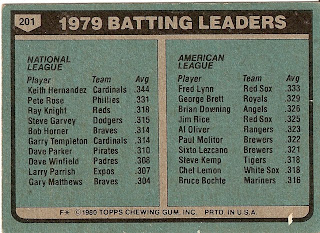 What is this card?
1979 Batting Leaders Card
Keith Hernandez of the Cardinals led all of baseball with a .344 average and Fred Lynn led the Junior circuit with a .333 average.

How was the race? Hernandez really didn't face one. If any, his strongest challenge came from his teammate Garry Templeton. Lynn, meanwhile, had a late-season challenge from George Brett of the Kansas City Royals. Brett never overtook Lynn and never got closer than three points.

Where are the 1980 League Leaders? American League leader George Brett finished second in 1979, National League leader Bill Buckner did not place in the top 10 during 1979.

Why I love this card
I always loved getting a League Leaders card. It was almost a two-for-one since both players pictured were stars. It made the card that much more special. However, what I liked about this card was that Lynn was wearing a red cap. In his regular issue card he is wearing a navy cap as had several of his teammates in other cards. I didn't realize that Topps just used an older picture of Lynn.

Something else....
There is an interesting group of names here. Out of the 20 names listed here, only four would wind up in the Hall of Fame.
Posted by Dean Family at 11:56 PM