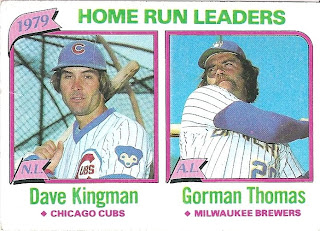 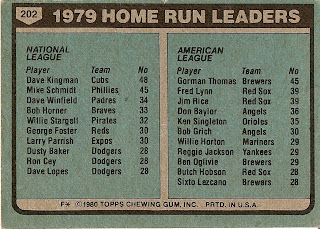 What is this card?
1979 Home Run Leaders Card
Dave Kingman of the Chicago Cubs led the major leagues with 48 home runs in 1979 and Gorman Thomas was the American League leader with 45. This is the second straight category where the NL leader was also the Major League leader.

How was the race? Kingman got off to a fast start and was the league leader at the All Star break. He was pursued closely by Mike Schmidt and even surpassed "Kong" at one point during the second half. Kingman clinched the title with seven homers in September. Thomas had 30 homers by mid-August and was not seriously challenged by his twin pursuers from Boston, Fred Lynn and Jim Rice.

Where are the 1980 League Leaders? Schmidt was the 1980 NL leader and finished second here. Reggie Jackson and Ben Oglivie, who finished tied for seventh in '79, would both go on to lead the AL in 1980.

Did these players ever repeat? Yes. Kingman would lead the National League in home runs in 1982 and finish in the Top Ten on ten different occasions in his career. Likewise, Thomas would also lead his league in homers in 1982, albeit in a tie with Reggie Jackson. Gorman would place in the Top Ten six times during his career.

Why I love this card
I remember the day I got this card. Being from the Midwest, I grew up in an anti-Yankee/Dodger/Red Sox/Phillies/Angels neighborhood. While we mostly rooted for the Tigers, we also gravitated to the Pirates, Royals, Indians, Reds, Brewers and Cubs. This card gave us as fans some validation that "our" players were just as good as "theirs."

Something else....
21 players listed on the reverse of this card, only five would wind up in Cooperstown. Interesting to see Willie Horton listed here in his final hurrah, same for Davey Lopes, who I never would have guessed finished in the top 10 in home runs. Ever.
Posted by Dean Family at 3:32 PM