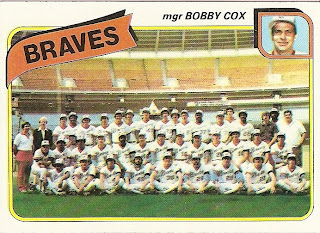 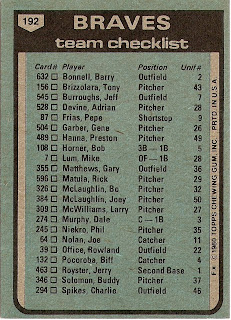 After a last place finish in 1979, the Braves made several changes to their roster for the 1980 season. Atlanta had the worst ERA and fielding percentage in the National League and they attempted address both issues. First, they signed Al Hrabosky to add depth to the bullpen. They then traded for catcher Bill Nahorodny. The Braves made two big moves at the Winter Meetings by traded for Chris Chambliss and Luis Gomez from the Toronto Blue Jays and Doyle Alexander from the Texas Rangers.

The Braves had two of baseball's most promising young sluggers, Dale Murphy and Bob Horner. Murphy would be the team's lone representative in the All-Star Game. Right fielder Gary Matthews would combine with Murphy, Horner and Chambliss to form a solid middle of the lineup. Glenn Hubbard earned the second base job, which he would hold for the next eight years. However, some moves didn't work. Eddie Miller was the Opening Day centerfielder but disappeared after only 11 games.

On the mound, the Braves ahad a future Hall of Famer in pitcher Phil Niekro won was a 20 game winner (and loser) in 1979. Niekro would lead the league in games started as well as losses in 1980. Alexander was a valuable addition, winning 14 games. And while Hrabosky struggled, Rick Camp and Gene Garber combined to stabilize the back of Atlanta's bullpen. The rest of the starting rotation was reliable but unspectacular.

Atlanta struggled to start the season and as Spring turned into Summer, the team seemed in dissarray and Cox's job was in jeopardy. Horner feuded with the front office over his contract and the release of catcher Joe Nolan shook team morale. However, Cox was able to rally the troops and the team played well down the stretch to finish 81-80 and in fourth place.

The 1980 Braves were 11-1 against the defending World Champion Pittsburgh Pirates and finished with a .625 winning percentage at home (50-30). However, several years of poor finishes did not sway the Atlanta fans as they finished last in the National League in attendance. Atlanta's strong suit was the longball at the fabeled "Launching Pad" at Fulton County Stadium. They finished second in the league with 144 home runs. By contrast that total would today place them 13th in the league.

Why I love this card
The wigwam in the background. The scan of this card is not great, but Chief Nocahoma's teepee made this stand out for me. I thought it was cool that Atlanta's mascot was a real guy, not a someone in a suit.