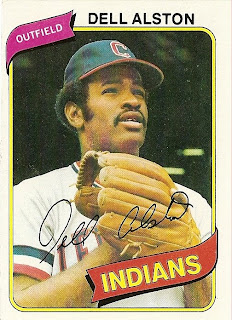 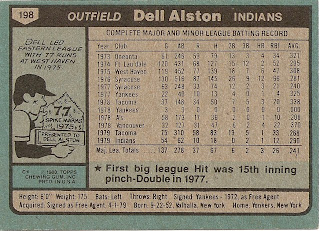 Who is this player?
Dell Alston, reserve outfielder, Cleveland Indians
1980 would be the fourth and final major league season for Dell Alston. Although he was the leading Tribe hitter in Spring Training, he appeared in just 52 games for the sixth-place Indians. The lefthanded hitting Alston batted a meager .222. He spent parts of the summer at Triple-A Tacoma and only batted .220 there as well. Alston stayed on the Cleveland roster throughout the off season but was released shortly before the 1981 season began.

Alston was originally signed by the New York Yankees as an amateur free agent in 1972. He had an lengthy minor league career where he was named an All-Star several times and earned a reputation as one of the Yankees top prospects. However, in New York, Alston was more often than not used as a pawn in the ongoing George Steinbrenner-Billy Martin-Reggie Jackson "Bronx Zoo" feud of 1977.

When Martin complained in the press over personnel, Steinbrenner responded by promoting Alston to the majors. Martin responded by using Alston instead of Reggie in an effort to bury Jackson on the bench. Despite that, Alston still managed to hit .325 in 22 games. The following season, he was traded to the Oakland A's, but batted only .208. The Athletics released him in March of 1979 and he signed on with the Indians.

In two years with Cleveland he split time between the majors and Triple-A, but hit .290 in 54 games with the Indians. He was used mainly as a pinch-hitter, with occasional starts in left field. A highlight came on the final day of the 1979 season when his hit in the bottom of the 11th won the game for Cleveland. He was also in attendance at the funeral of Thurman Munson for which he was interviewed for a 2009 book.

Why I love this card
Dell Alston tricked me. Sometimes on a wax pack you could tighten the wrapper and figure out who a player was or what team he played for. I tried this trick on a pack one day at the 7-11 and clearly saw the cartoon here with the home plate and "77". I swore that it was Omar Moreno, and I loved the Pirates. After all, he stole 77 bases in 1979 so it made sense. Poor Alston, I held it against him that whole summer.

Something else....
Here is another one of the Double Printed cards of the 1980 set. In addition to being a DP card, this card is Alston's last Topps card in his last major league season. Donruss saw fit to print a card of him in the 1981 set, but Topps passed.
Posted by Dean Family at 11:01 PM