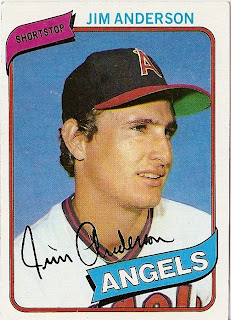 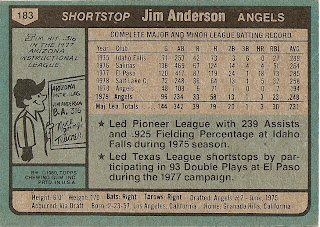 Who is this player?
Jim Anderson, utility player, California Angels
The Player To Be Named Later. When the Angles acquired pitcher John Montague from the Seattle Mariners for the stretch drive in 1979, Jim Anderson was cast out in December. Anderson played five different positions with the 1980 Mariners, primarily as a third baseman and shortstop. Providing much-needed depth from the bench, Anderson even appeared behind the plate in a game for Seattle. He achieved career highs in nearly every offensive category and appeared in 116 games.

A high school standout at Kennedy in Granada Hills, California, Anderson played in the state championship game in just his sophomore year. He earned the attention of the local Angels, who drafted him on the second round of the 1975 draft. He worked his way up the minor league ladder, earning a reputation as a good defensive player. He eventually landed in Anaheim in July of 1978 and remained on the Angels' roster for the remainder of the season, usually as a substitute. He saw action as a late inning sub but struggled hit over .200.

In 1979, he was with the Angels for the entire season, culminating in the Angels' first post-season appearance. He had a four-hit game in July to lead an Angel rout against the Kansas City Royals and when the Angels clinched the AL West, Anderson poured champagne over the head of President Richard Nixon. The deposed former President had adopted the Angels as his favorite team and was a fixture at many of their games during the season.

Anderson spent only one more season in Seattle (1981) and was waived shortly before the start of the 1982 season. He spent the entire 1982 campaign with the Texas Rangers' Triple-A club in Denver and earned a spot on the major league roster in 1983. In limited action in two years with the Rangers, Anderson batted only .181. He was traded to the Montreal Expos with Bob Sebra for the rights to Pete Incaviglia in November, 1985 but he never again appeared in a major league game, ending a six year career.

In recent years, Anderson has become an active member of the Angels Alumni Association and makes numerous appearances each month at various activities throughout the Greater Los Angeles region. He also entered the real estate industry after his playing days is helping to lead the cause of deregulation of public utilities and telecommunications.

Why I love this card
This card reminds me of our third grade school pictures. I know that the blue background here is likely the Spring Training sky, but it looks exactly like the tarp that they would set up when they would take our photo. I half expect to see "Jim '80" embossed in gold in the bottom right hand corner. No way Sr. Kathleen would have let us get away with looking away like Mr. Anderson is doing here.

Something else....
Anderson's card is another one of the DP cards sprinkled throughout the set. Like most of these, if I opened three packs, I would get this card (it seemed). In one of my more destructive moments, I set this card up in the path of the lawnmower, "just to see what it would do." The results were predictable.
Posted by Dean Family at 10:54 PM