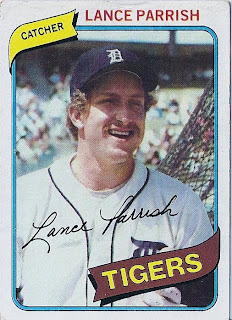 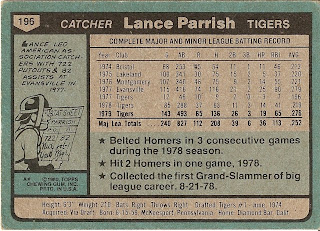 Who is this player?
Lance Parrish, catcher, Detroit Tigers
Regarded as the top young catcher in the American League, Lance Parrish of the Detroit Tigers had his breakout season in 1980. The righthanded hitting Parrish slugged 24 home runs, leading his team and was selected to his first All Star Game. He was also recognized at the end of the season by winning his first of six Silver Slugger Awards. Parrish would be the cornerstone on which the Tigers of the 1980s would be built.

Born in Clairton, Pennsylvania, Lance Parrish moved to southern California when he was a young boy. Graduating from Walnut High in Diamond Bar, he was a first round selection of the Detroit Tigers in 1974. After three seasons working up the minor league ladder, Lance made his debut in September 1977 and from that point was in the majors for good. Originally a below average defensive catcher, he would improve his defensive skills considerably, eventually winning the Gold Glove three times and being known for the bright orange perimeter around his catcher's mitt.

In 10 years in Detroit, Parrish was the most feared hitter in the Tigers lineup. A consistent home run threat, Lance was an awesome physical specimen in the days prior to the "Steroid Era." He established an American League record in 1982 when he clubbed 32 homers as a catcher and earned national attention by throwing out three base runners in that summer's All-Star Game. In 1984, he was the cleanup hitter on a dominant Detroit Tiger team that won the World Series. Averaging 21 HR and 70 RBI a season, he was leading the majors in homers in 1986 when his season was prematurely ended due to a back injury.

He signed a free agent contract with the Phillies amidst much fanfare, but was never the same player. He spent only two seasons in Philly where the fans were brutal to him, even booing his wife and son at different points. He returned to California as a member of the Angels and was an All-Star in 1990. Lance played for five teams (Angels, Mariners, Indians, Pirates, Blue Jays) in his final four seasons, retiring after the 1995 season and 19 years in the majors.

Lance has been active since his playing days coaching and managing at both the major and minor league level. He returned to Detroit in the early 2000s, first as a television commentator and then as a coach from 2003-2005. He was the inaugural manager of the Great Lake Loons in 2007. After many years living in California, Lance moved to Tennessee in 2009. He also had surgery on his knee and rotator cuff to repair some old nagging injuries. Parrish returned to Detroit in September 2009 to celebrate the 25th anniversary of the 1984 champions.

Why I love this card
While he grew up in California, Parrish was born in the same town as my Dad, Clairton, PA a small town 13 miles south of Pittsburgh. Sometimes Parrish's place of birth (including this card) is listed as McKeesport, PA, a neighboring town where the hospital was located. Needless to say, that was a very cool fact that made me very proud to say that my Dad and Lance Parrish shared a hometown. I spent every summer from 1972-1988 in some capacity with my Dad's family. In fact, a Parrish is buried on the same hill as my grandparents and whether it's true or not, I always believed that somehow there was a connection.

Something else....
I could go on and on about Parrish. My interest in the game coincided with the rise of the Tigers as a contender and Parrish as an All-Star, so there is alot about him that had to be left out. Worth mentioning however:

* He guest starred as himself on an episode of Diff'rent Strokes. Really.

* He served as a bodyguard for Tina Turner.

* Rookie Mike Piazza beat him out for the final spot on the 1993 Dodgers.

However, another personal Parrish story will serve here. September 12, 1981. Family outing to Tiger Stadium for a ballgame. We had a large group with us as family from Pittsburgh were with us at the game. Had seats in the lower deck in left field. Game goes 12 innings and over 4 hours. My sister and young cousin begin whining to leave and eventually the adults agree. As we are heading out the exit a large roar from the crowd arises as Parrish hits a laser that crashes into my Dad's now unoccupied seat. We look at each other in astonishment. With Tiger Stadium going crazy over Parrish's game-winning blast, Dad looks at me and says "Not a word." He still doesn't like to talk about the home run ball he missed.

To finally close the book on Parrish, here is his 2003 Fan Favorite Card for comparison and voting. The 2005 Ray Knight defeated its 1980 counterpart 5-2 in the last vote off. Booth is open on the right. 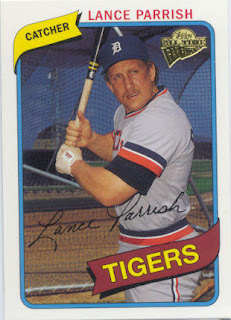