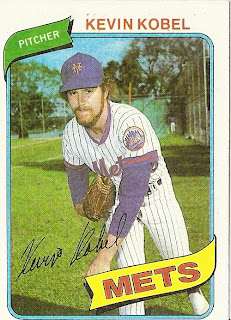 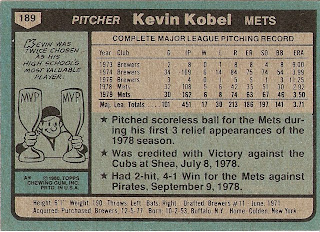 Who is this player?
Kevin Kobel, relief pitcher, New York Mets
When the 1980 season opened, Kevin Kobel had earned a spot in the New York Mets' bullpen after being "on the bubble" during Spring Training. He walked three of the eight batters he faced in his first outing and things didn't improve for him. After four appearances, Kobel's ERA swelled to 9.00. He continued to struggle and was used infrequently. In June, he was traded to the Kansas City Royals and Kobel spent the remainder of 1980 at Triple-A Omaha. It would prove to be the last of six major league campaigns for Kobel.

Originally from Buffalo, New York, the lefthanded Kobel was drafted by the Milwaukee Brewers shortly after his high school graduation in 1971. He earned a brief look by the parent club in late-1973 but was unimpressive in two games against division rivals Boston and New York. The following season, however, Kobel earned a spot in the Milwaukee rotation. Although he was 6-14, he achieved career bests in innings pitched, shutouts and complete games. A highlight came on May 27th when he out dueled future Hall of Famer Nolan Ryan.

Kobel developed arm trouble in 1975, pitching only four innings over the next three seasons, missing the entire '75 and 1977 campaigns. Uncertain that he could return to the majors, Milwaukee sold him to the New York Mets in December of 1977. Determination and hard work earned him a spot on the pitching staff and Kobel responded with an outstanding effort in 1978. In 32 games, he posted a 2.91 ERA with five victories.

He resumed a similar role with the Mets in 1979 but injuries pushed Kobel into New York's starting rotation. He had three starts go into the eighth inning without allowing a run, but only earned one victory. In June, he threw a three hit shutout against Atlanta, but was primarily a .500 pitcher the remainder of the way. His ledger at the end of the year was a 6-8 record with a 3.54 ERA.

Kobel pitched in the minor leagues through 1982 before retiring for good. In retirement, he moved to Arizona and became an active member of the Arizona Major League Alumni Association which travels the state giving lecture and instruction to Little League and high school players.

Why I love this card
Sunday, August 24, 1980. My grandpa had been sick for some time and died that day. I had just bought a pack at the 7-11 and was sitting on the curb with some buddies and this card was inside. My dad and uncle came around the corner in my dad's huge 1978 Buick and gave me the "better get home" look. There are a handful of cards from this pack that I associate with that day and Kobel is one. Sorry to be so morbid, but Kevin Kobel reminds me of Grandpa today.

Something else....
Nice to see a break from the head shots that have been on a roll lately, but Kobel looks like he is at a tennis court. And is that guy in the background with his back to the camera taking a leak? On the other hand, never mind.
Posted by Dean Family at 10:06 PM