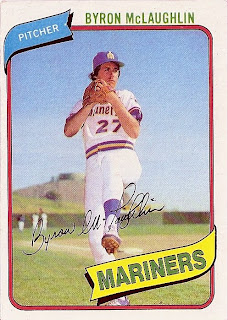 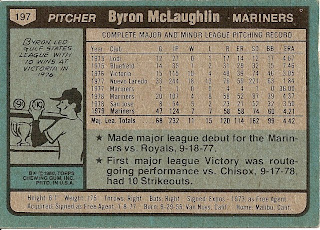 Who is this player?
Byron McLaughlin, relief pitcher, Seattle Mariners
The summer of 1980 was not a memorable one for Mariners' relief pitcher Bryon McLaughlin. He was hit hard on Opening Day, a preview of difficulties to come. When April ended, his ERA was 8.36. At the end of May it was 9.25. He improved somewhat over the summer, but his ERA still hovered over 6.00. He was given a few opportunities to start, but didn't perform well in that role either. On the pitching-starved Mariners that lost 103 games, he finished the year 3-6 record. After four years in Seattle, Byron was traded in December to the Minnesota Twins.

Originally signed by the Montreal Expos in 1973, The righthanded McLaughlin was released and also spent time with the Baltimore organization where he was similarly cut loose. The 1977 Mariners, in their first season, signed McLaughlin pitching out of Nuevo Laredo in the Mexican League and he made is major league debut in September of that year. He began the year in Seattle but bounced between the major leagues and Triple-A. Appearing mainly as a starting pitcher, he finished 4-8 with a highlight being a complete game, 10 strikeout performance against Chicago.

In 1979, McLaughlin was sent to the bullpen where he was given the closer role. Despite a high ERA, he led the team with 14 saves. He was poised to share the role in 1980 with Dave Heaverlo, but his poor start never allowed him to regain the position. He failed to make the Minnesota Twins in 1981 and returned to Mexico for two season. The California Angels signed him in 1983 and he briefly appeared with the Halos, pitching ineffectively. It would be the final season of his five year career.

His connections in Mexico would serve him well in the mid to late 1980s. Simply, he was part of a group that made a deal with Korean companies to manufacture cheap counterfeit sneakers for the Mexican market. The scheme would earn $750,000 a month as the fake Reeboks and Converse were sold in Mexico at 100% markup. Eventually the authorities caught up with him and he faced criminal charges of money laundering. McLaughlin posted bail, and with $2.5 million in an overseas account, skipped sentencing and fled the country. It is believed that McLaughlin is somewhere in France although his whereabouts have not been confirmed in almost twenty years.

Why I love this card
Two things that jumped out for me as a kid on this card. First, it looks as if McLaughlin is trying to stamp out the Mariners banner on the bottom of his card. Seeing how his 1980 season went, can't say that I blame him. Second, I love what appears to be the desert mountains in center field. After so many of the Spring Training shots appearing to be in a park, this one is different.

Something else....
Why hasn't McLaughlin been featured on America's Most Wanted yet?
Posted by Dean Family at 11:43 PM