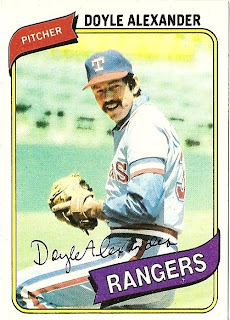 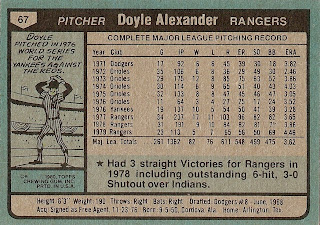 Who is this player?
Doyle Alexander, starting pitcher, Texas Rangers
1979 saw Alexander miss some playing time, first by being demoted to the bullpen and later suffering a broken jaw when a ball struck him in batting practice. As a result, his five wins in 1979 were the lowest total in a season in his career up to that point. The Rangers traded him in December to the Atlanta Braves and Alexander thrived in the Atlanta rotation, making 35 starts and winning 14 as the Braves #2 starter behind future Hall of Famer Phil Niekro. He was unhappy with his salary, however, and was traded again at the end of 1980 to the San Francisco Giants.

The winner of 194 major league games with eight different teams, today Alexander is more remembered for the trades he was involved in over his 19-year career. The first came after the 1971 season, Alexander's rookie year with the Los Angeles Dodgers. After earning a spot in the Dodger rotation after a mid-season callup, he was part of a package to Baltimore that brought Frank Robinson to the Dodgers. With the Orioles great pitching depth, Alexander was in and out of the Orioles rotation for 4 1/2 seasons while establishing himself as a reliable and versatile pitcher.

Midway through the 1976 season, he was traded to the New York Yankees in a deal that brought Scott McGregor, Tippy Martinez and Rick Dempsey to Baltimore. Alexander helped complete the Yankee rotation and he pitched in his only World Series that fall, but he and the Yankees lost the Series to the Cincinnati Reds. When owner George Steinbrenner refused to guarantee Alexander 20 starts as a Yankee in 1977, Alexander left the Big Apple and signed a free agent contract with the Texas Rangers.

In Arlington, he immediately won 17 games in his first season as the Rangers won 94 games and finished in second place. However, both the Rangers and Alexander struggled to achieve the same levels in the following seasons and he was traded to Atlanta. The early 1980s saw Alexander become a baseball vagabond with stops in Atlanta, San Francisco and back to the Yankees between 1980-83. In late 1982, was put on the disabled list when he punched a wall. He was so embarrassed that he offered to return his salary. Instead the Yankees released him in early 1983.

He was picked up by the Toronto Blue Jays, where he helped the young team into contention with consecutive 17-win seasons in 1984 and 1985 and was carried off the mound when he pitched the AL East clincher in 1985. When he struggled in 1986, he returned to the Braves. Near the end of the 1987 season, the Braves traded him to the Tigers for minor league prospect John Smoltz. Alexander went 9-0 for the Tigers as they won a narrow AL East Division race. He continued his hot pitching in 1988 and was elected to his first All Star Game. The Tigers collapsed in 1989, but the reliable Alexander still made 33 starts (leading the AL in losses) and retired at the end of the season

Why I love this card
Alexander had a reputation of being one of the more grumpy ballplayers of his era. In his three years in Detroit, I remember him vividly as the stereotypical grizzly veteran getting by on guts and guile. Imagine my surprise when I reacquainted with this card and Alexander has a big grin on his face. I believe that this is a first. I cannot recall ANY other Alexander card throughout his career in which he is smiling.

Something else.....
The Alexander-for-Smoltz trade today consistently gets included in most "worst" trades of all-time lists. As a Tiger fan, I maintain to this day that this trade was a win-win. I mean, Alexander was unbeatable down the stretch. They won all 11 of his starts and he pitched or combined on five shutouts. The Tigers would not have won the division without him. And he took the Tigers to within one game of a repeat in 1988.
Sure Smoltz became a Hall of Famer, but he has said that he didn't think he would have become the pitcher he did had he stayed in Detroit. And if he did, he would have left long ago as a free agent. The Tigers were a mess in the 1990s and even Smoltz would not have helped them. Here is another article on the trade in proper perspective.
Posted by Dean Family at 8:53 PM