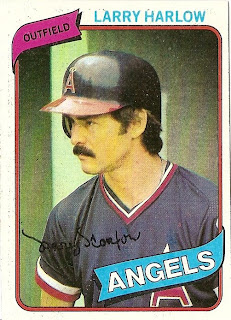 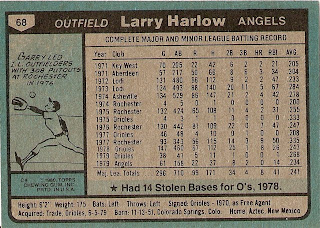 Who was this player?
Larry Harlow, reserve outfielder, California Angels
Although he began the 1979 season with the Baltimore Orioles, Harlow was traded in June to the California Angles. He was a reserve outfielder most of the season and had the game winning RBI in the Angels' only win in the ALCS that fall. In the offseason, he entered into a weight lifting and conditioning program, something that was not as common as today. Harlow received more playing time in 1980 due to an injury to Dan Ford and batted .276.

Larry Harlow was drafted by the Orioles in 1970, a part of a huge influx of talent that the Orioles produced throughout decade. Unfortunately, that influx also prevented the left-handed hitting Harlow from cracking the major league lineup. He made his major league debut in a late-season call up in 1975. He did not appear in the majors in 1976 but made the team out of Spring Training in 1977.

He stuggled at the plate and was returned to the minors. When Al Bumbry was injured in 1978, Harlow took over for him in center field. He achieved career highs in nearly every offensive category, appearing in 146 games, even appearing as a pitcher in one of them.

1981 was Harlow's last season in the major leagues, batting .207 in only 43 games. While he returned to the minors for a couple of seasons, his six-year major league career had come to an end. He also played both seasons in the Senior Professional Baseball Association in 1989 & 1990.

Why I love this card
Harlow's helmet. While not quite on par with the Great Gazoo, his helmet jumps out at you. If you look closely, you can see the reflection of a couple of his teammates in there.

Something else....
Harlow in the same season played for the two teams that faced each other in the post-season (1979 ALCS). I know that there have to be other players who have done this, but for the life of me I can't think of any.
Posted by Dean Family at 2:55 PM