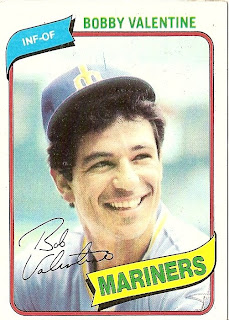 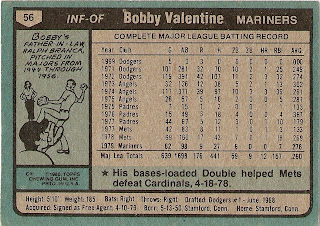 Who is this player?
Bobby Valentine, utility player, Seattle Mariners
When this card was active during the 1980 season, Valentine was not. The 30-year old right-handed batter had ended his active career and had begun pursuing other interests. He was hired by NBC to be a commentator and he opened a restaurant in his home town of Stamford, CT that is still open today.

Valentine was considered the top Dodger prospect at a time when the Dodgers farm system was loaded with names like Garvey, Lopes, Bucker, Cey and Russell. He made his way quickly through the minors, earning a brief September call up in 1969, only appearing as a pinch-runner. While considered one of the organization’s top athletes, misfortune began occurring even in the minor leagues, including beanings and knee injures

He spent two years with the Dodgers in 1971 and 1972, acquitting himself passably as a utility player but showing none of the dominance he had displayed at lower levels. He found himself bundled into a massive trade in the fall of 1972 that brought star pitcher Andy Messersmith from the Angels. In Anaheim, he began the 1973 season as a shortstop before taking over center field duties. He suffered a broken leg trying to scale the outfield fence, ending his season. While he returned as a regular in 1974, he suffered numerous injuries and spent the rest of his career with three more teams (Mets, Padres, Mariners) in limited capacity.

He was named manager of the Texas Rangers in mid-1985 and led the Rangers to a second place finish in 1986. Much like his minor-league manager Tom Lasorda, Valentine was an attention grabber, even when his team did not perform. The Rangers never again finished as high as they did in 1986, and Valentine was let go midway through the 1992 season. He was hired by the New York Mets in 1996 and he led them to three second place finishes, two playoff appearances and the 2000 World Series. His strange antics marked his reign as Mets boss and a slip in the standings combined with run-ins with players led to his dismissal in 2002.

Why I love this card
Besides any reason to see the Mariner pitchfork logo, Valentine is the first player pictured in this set to become a future manager. That and his father-in-law is Ralph Branca. That's pretty cool.

Something else.....
A master of hyperbole, Valentine also claims to have invented the wrap sandwich.
Posted by Dean Family at 8:57 PM