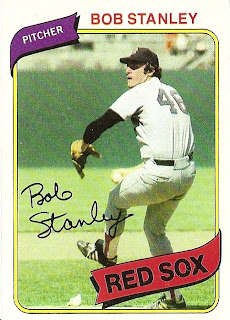 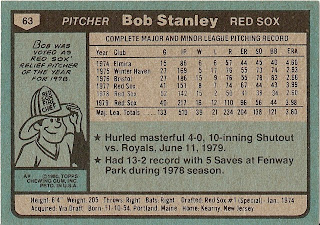 Who was this player?
Bob Stanley, relief pitcher, Boston Red Sox
Although an All-Star as a starter in 1979, Bob Stanley would finish the 1980 season pitching out of the Boston bullpen. He began the season as part of the Red Sox rotation, but was inconsistent. When the Red Sox called up rookie John Tudor, Stanley was moved to the setup role for closer Tom Burgmeier, an All Star closer in 1980. In that capacity, Stanley won 4 games, saved 14 and chalked up an impressive 2.30 ERA.

Although he is the Red Sox all time leader in saves, the man known as “Steamer” is probably best known today for the one game that he didn't save. However, the right-handed Stanley was a sinkerball specialist that jumped from AA ball in 1977 to the Red Sox and spent the next 13 seasons in Beantown. He was one of the Red Sox best pitchers in the memorable 1978 AL East pennant race, compiling a 15-2 record with 10 saves. However, he gave up two more runs in the Bucky Dent game that gave the Yankees the padding they needed to win the one-game playoff.

After winning 16 games in 1979, Stanley would go on to pitch the next seven seasons primarily out of the bullpen. As he eventually became the Red Sox closer, Stanley would routinely pitch multiple innings in each appearance, sometimes going three or more innings. He finished second in the AL in ERA in 1982 and the following year, he was named to the American League All Star team, en route to a 33 save season (2nd best in the AL). Stanley was one of the few pitchers in history to be an All Star as both a starter and reliever.

Stanley had lost his closer role by 1985 and when the Red Sox won the American League pennant in 1986, Stanley was a vital part of the bullpen-by-committee. While Stanley had the most saves, rookie Calvin Schiraldi had assumed the closer's role by the time the postseason began. Of course, when Schiraldi faltered, Stanley was on the mound in the infamous Game Six and was also on the mound in Game 7 when the Mets scored three runs off of three pitchers to clinch the World Series.

Partially due to the World Series, Stanley returned to the rotation in 1987, but did poorly, losing 15 games and posting a 5.01 ERA. He was returned to the bullpen again in 1988 and did well, helping the Red Sox win the AL East again. However, the A's swept the Sox in the ALCS. Stanley's final season was 1989 when a hand injury forced him to retire. He coached, ironically, in the Mets organization after his playing days and today works with USA Training Centers.

Why I love this card
When I think of Bob Stanley, this is exactly how I picture him. Road uniform, looking as if he is coming right at you. It as almost as if I can freeze him in this spot to somehow stop the wild pitch/passed ball to Mookie Wilson.

Something else....
A member of the Red Sox Hall of Fame, no one in Boston Red Sox history has appeared in more games as a pitcher than Bob Stanley. Think about that for a minute. Cy Young? Roger Clemens? Luis Tiant? Pedro Martinez? Curt Schilling? None of them had more appearances than Stanley. His team record of 132 saves will likely be passed sometime in 2009 by Jonathan Papelbon.
Posted by Dean Family at 8:47 PM