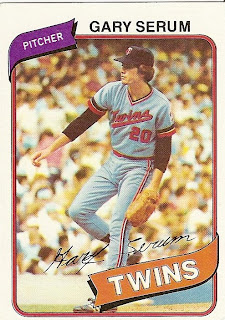 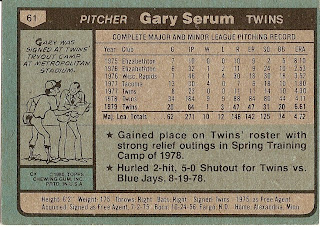 Who was this player?
Gary Serum, relief pitcher, Minnesota Twins
Nicknamed “Truth” by teammate Roy Smalley, Gary Serum had a difficult 1979 season that saw him split time between Minnesota and AAA Toledo, posting a 6.61 ERA during his time with the Twins. He failed to make the major league club coming out of Spring Training in 1980 and never again appeared in a major league game.

The right-handed Serum was a graduate of St. Cloud State University, but was not drafted by a major league club. In 1975, he attended an open tryout and was signed by the Twins. After two years in the minor leagues, he made his major league debut against the California Angels and pitched two innings of scoreless relief. He was one of the youngest players in the major leagues that season and his late-season showing earned him a spot the following season on the Twins pitching staff.

He began the 1978 season in the bullpen, but was soon moved into the starting rotation when injuries struck the Twins pitching staff. In his first start, he pitched a complete game win, and he was a .500 pitcher for the Twins that season. The highlight of his season came on August 19th when he pitched a complete game two-hitter against the Toronto Blue Jays. It was definitely the best performance of his career. He finished the 1978 season 9-9, with 23 starts and six complete games.

When he was unable to make the Twins in 1980, he spent the season in Toledo pitching primarily in relief. The following season, he was traded to the New York Yankees organization but his poor performance at Columbus led to his release and he was through with organized baseball after the 1982 season.

Why I love this card
The first game I ever went to was the Twins visiting the Tigers at Tiger Stadium. We had great seats near the opposing team’s dugout. I was new to the autograph collecting thing and had no idea what to do. Dad told me to ask the players to sign my ticket stub and one of the players hanging about was Serum. He waited for me to fumble with my scorecard pencil and hand him the ticket. Looking at this card now reminds me how nice he was to a 8 year old kid at his first game. Thanks Gary.

Something else....
I had always thought that this photo was taken at Yankee Stadium. However, in researching Serum's career, I noticed that he never made an appearance against the Yankees, so that can't be it. Stadium watchers out there....anybody have a clue where the Twins are playing in Serum's card??
Posted by Dean Family at 8:05 AM