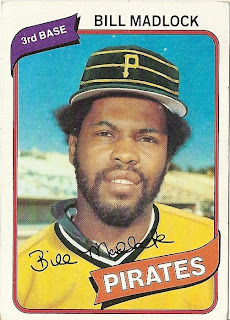 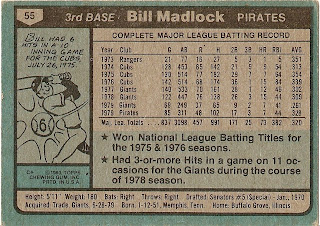 Who was this player?
Bill Madlock, third baseman, Pittsburgh Pirates
Among all active National Leaguers, Madlock held the highest career batting average at the time this card was released. He was the catalyst in the “Fam-A-Lee” Pirates as his midseason trade propelled Pittsburgh to a World Championship. As 1980 began, the Bucs were a preseason favorite to repeat, mainly because Madlock would be with the team the entire season. Injuries killed the Pirates chances, however, and the "Mad Dog" slumped and was issued a suspension that at the time was the longest in National League history.

Called up to the Texas Rangers in September 1973, Madlock batted .351 in just 21 games and became the prize prospect in a trade to the Cubs for Ferguson Jenkins. Madlock was originally unpopular with the Wrigley faithful because of Jenkins’ departure and that he was replacing popular veteran Ron Santo. He quickly won them over, first by batting .313 as a rookie and receiving Rookie of the Year consideration. For an encore, he won consecutive batting championships in 1975 (.354) & 1976 (.339) and was even named All Star Game MVP in 1975.

After his second batting title, Madlock became engaged in a contract dispute with the Cubs owner, Phil Wrigley who criticized him in the press and vowed to trade him. True to his word, Wrigley shipped Madlock to the Giants, enraging Cub fans. He was moved to second base and he attributed a drop in average to Candlestick Park. He was traded to the Pirates in mid-1979 and returned to third. The Pirates went 62-31 and he helped them win the World Series with .375 average and a 4-hit performance in Game 5. Madlock would win two more batting titles in 1981 (.341) and 1983 (.323) establishing himself as the premier batsman in his league, but he was overshadowed at his position by future Hall of Famer Mike Schmidt.

By 1985, the Family was gone and Madlock, as team captain, tried to be positive. He was traded again, this time to the Los Angeles Dodgers and he helped them reach the NLCS, losing to the Cardinals in six games. Two years later, he was picked up by the Detroit Tigers and helped them edge the Toronto Blue Jays and win the AL East. The Tigers released him after the season and he spent a year in Japan before finally retiring after a 15-year career and a .305 batting average.

After his career, he spent some time coaching, notably as Phil Garner's hitting coach in Detroit. He is also lent his name to the Hitters Challenge Internet League coming in 2010.

Why I love this card
If you look really close, I believe that this card is airbrushed. First, the hat does not appear to be the shape of the pillbox Pirate hats that the Bucs wore in other cards in this set and the the "P" looks a little small. Granted, its not as bad as some other Topps airbrushing, but there was always something fishy about this card to me.

Something else....
The Detroit Tigers' acquistion of Madlock was the turning point in their 1987 season. When he arrived, the team was in fifth and an afterthought in the AL East. The team roared during the summer, with Madlock hitting 14 HR and 50 RBI in a little more than 80 games. His vicious slide wiped out Tony Fernandez, breaking his forearm in a crucial late-season series against the Blue Jays. Madlock received death threats and the Tigers edged the Jays on the final day to claim the division. 1987 was the first summer I could drive and we were at Tiger Stadium often that year to see that team. Thanks for the memories Mad Dog.
Posted by Dean Family at 9:26 PM