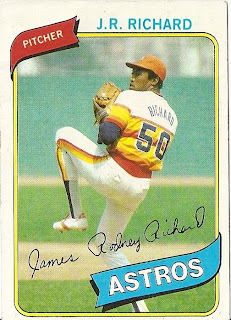 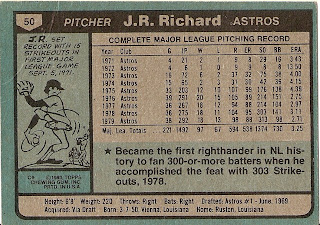 Who was this player?
When I was opening packs in 1980, this man was bar none, the most intimidating pitcher in the game. James Rodney “J.R.” Richard had entered his prime. He was leading the NL in ERA and strikeouts at the All Star break, and was the leagues starting pitcher. He was coming off a season in which he established the National League record for strikeouts by a righthander, two seasons in a row in which he led the league with 300+. He was the defending NL ERA champion on a team expected to challenge for a post season spot. Then fate ended it all, leaving him the greatest “what if” of this era.

Richard was the second pick overall of the 1969 amateur draft by the Astros. A little more than two years later, Richard struck out 15 batters, tying the record for most strikeouts in a major league debut. During the next few seasons, however, Richard split time between the minors and majors and did not become a regular starter with the Astros until 1975, when the death of Don Wilson moved him into the rotation. He responded with 12 wins and although he led the league in walks and wild pitches, it was clear that in time J.R. would become a star.

He entered the 1976 season as the pitching staff ace and took over Larry Dierker's position as the Opening Day starter for the Astros. Richard finished the season with a 2 wins (4th), 14 complete games (5th), and 214 strikeouts (2nd) in 291 innings of work (also 2nd). From 1977 to 1979, he established his reputation as a fearsome pitcher, not only leading the league in strikeouts, but also fewest hits allowed per 9 innings. No right-handed pitcher ever struck out as many NL batters as Richard did in 1978 and 1979.

J.R. was dominating again in 1980 and the Astros were contending for the NL West. Teaming with free agent Nolan Ryan, the Astros had a fearsome rotation. Richard dominated AL hitters in the All Star Game, pitching three perfect innings, striking out future Hall of Famers Reggie Jackson and Carlton Fisk in the process. However, Richard was complaining about a tired arm, a contention that no one took serious until Richard collapsed three weeks later of a stroke in the Astrodome. Later examinations showed that Richard was suffering from extensive arterial thoracic outlet syndrome. While pitching, his clavicle and first rib pinched his subclavin artery and eventually created the blockage that caused the stroke.

The Astros won the National League West in 1980, needing a one-game playoff against the Dodgers to do it. They were nipped by the Phillies in the NLCS in five games. Richard threw out an emotional first pitch during the series, leaving fans everywhere to wonder how far Houston would have gone if management and the media took his complaints seriously. While he tried several times to comeback, he was never able to and the Astros released him in 1984. Much has been made on his life after baseball, including living under a bridge and his recent work with a local Houston church and area youth. That can be seen here. Many have speculated that had his career not been interrupted, he would have been an eventual Hall of Fame pitcher.

Why I love this card
This card is a fitting tribute to Richard’s playing career. Back to the camera, in full windup, you can almost sense the fastball on its way. No staged poses, no smiling head shots. This card captures perfectly Richard’s aura during the spring and summer of 1980. For some reason, he remains the only player that could wear the rainbow jersey of the Astros and still be intimidating.

Something else....
In 2005, the film Resurrection: The J.R. Richard story was released, a scene can be found here. Also, This Week In Baseball caught up with Richard in 2009.
Posted by Dean Family at 6:51 AM