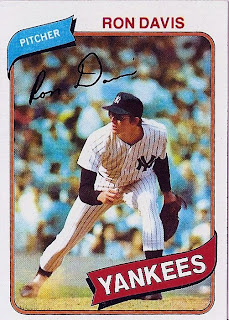 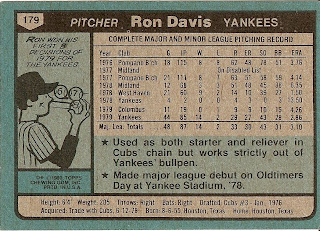 Who is this player?
Ron Davis, relief pitcher, New York Yankees
A hard throwing righthander, Davis was entering his second full season in 1980. He was slated to serve as setup man to Rich Gossage after an effective performance as closer when Goose was injured in 1979. In a largely unheralded role, Davis won nine games, saved seven and finished the year with a 2.95 ERA. His success was instrumental in leading the Yankees to the AL East title, despite their loss in the ALCS to the Kansas City Royals. Soon, many successful teams would begin to use this formula of a solid setup man to their closer.

Originally drafted by the Chicago Cubs, he was traded while still in the minor leagues to the New York Yankees in 1978. He made the most of his first major league opportunity the following season winning 14 in relief and saving nine in 44 appearances. His performance earned him Rookie of the Year consideration as Davis finished fourth in the balloting.

1981 was arguably the best of Davis' career. He was recognized for his effective work by being named an All-Star, appeared in the World Series (a six-game loss to the Dodgers) and set a record for striking out eight consecutive batters as a reliever in a May game against the Angels. Davis would prove that this was no fluke as he struck out three or more in 11 of his 43 appearances. With his stock high, he was traded to the Minnesota Twins for shortstop Roy Smalley.

In Minnesota, Ron never attained the same level of success that he had in New York. Playing for the worst team in the American League in 1982, Davis lost nine games and his ERA ballooned. He placed in the top 10 the next four years in saves (1982-1985), totalling 106 over that span. However, Davis was the scapegoat for a Twins organization that was going through growing pains. He set a record in 1984 for blowing 14 saves a mark that still stands. In 1986, he lost his closer's role with two spectacularly blown saves early in the year. You can read about those in Davis' Wikipedia entry here.

Davis was traded to the Chicago Cubs midway through the 1986 season and spent the last two seasons of his career in middle relief with the Cubs, Dodgers and Giants. His major league career ended in 1988 after 11 seasons. Davis played in Japan in 1989 and married Kendall Davis, lead singer for the Groove Merchants. Today, he runs the Major League School of Baseball Camps for Children in Arizona and his son was drafted by the New York Mets in 2008.

Why I love this card
I can recall the date that I received this card. Sunday, August 16, 1981. The strike had just ended and the Yankees were visiting Tiger Stadium. The game was broadcast locally in Detroit. Louie down the block was a major Yankees fan and we were watching the game at his house. He was really rubbing it in when the Yankees entered the ninth with a 4-1 lead. The Tigers rallied to score four in the ninth, capped by a dramatic Kirk Gibson home run to win the game, one that will remain with me probably as long as I live. Louie was so disgusted with Davis (who allowed the home run) he traded it this card to me on the spot. That is the one you see above.

Something else....
Fitting that a Yankee card would follow a Phillie card during the World Series. During the 1981 Strike, Davis worked as a waiter in a Kansas City restaurant. He was part of the rescue efforts when a walkway collapsed on July 17, 1981 that killed over 200 people. I remember this happening at the time, but it had been pushed from my memory until I was researching Davis for this post.
Posted by Dean Family at 8:24 PM