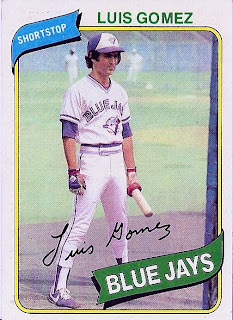 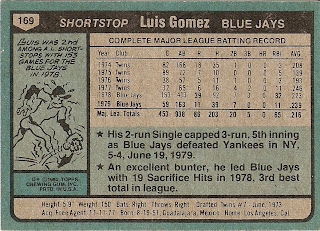 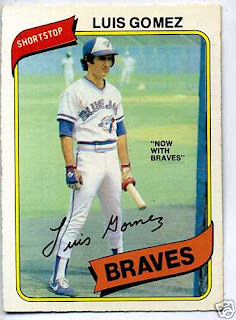 Who is this player?
Luis Gomez, reserve infielder, Toronto Blue Jays
As this card was being pulled from packs of cards in 1980, Luis Gomez was already long gone from Toronto and was given the starting shortstop position of the Atlanta Braves. Replacing Pepe Frias, Gomez was an excellent defensive player and was considered an upgrade at the position. He set an Atlanta record in 1980 with a .968 fielding percentage at shortstop and strung together 42 consecutive errorless games. However, he had a horrible year at the plate, batting a meager .191 with only six extra-base hits (all doubles).

Luis Gomez was the first Mexican native to be selected in the amateur draft, when the Minnesota Twins picked him out of UCLA in the 1973 amateur draft. Gomez was a tremendous athlete; he played basketball as a freshman at UCLA with Bill Walton and starred on the diamond for three seasons. He made his debut in Minnesota less than a year later. He appeared in 82 games during his rookie season, mostly at shortstop, and batting .208.

In four seasons with the Twins, Gomez established a reputation as a fine fielder, which earned him a spot on a major league roster. However, his difficulties with the bat did not earn him significant playing time. In 241 games, he batted only .199 and appeared mainly as a defensive replacement. At the end of the 1977 season, the Twins did not resign him to a contract and he caught on with the Toronto Blue Jays.

The Blue Jays were in their second season in 1978 and the talent pool was extremely thin. Gomez had his finest season, appearing in 153 games and achieving career highs in almost every category. He had four three-hit games and had 32 of his 90 career RBI. However, when the Jays acquired Alfredo Griffin in a trade prior to the 1979 season, Gomez was returned to the bench. Griffin meanwhile went on to win the Rookie of the Year Award. After his poor offensive performance in 1980, Gomez again lost his starting position in Atlanta, this time to Rafael Ramirez. 1981 was the final season of his 8-year career as Gomez was released in Spring Training 1982.

Gomez joined the Mormon Church, largely in part to the influence of teammates Alan Ashby and Dale Murphy. Ironically, when Gomez joined the Senior Professional Baseball League for the 1989 and 1990 seasons, he hit .293 during and .340, far outdistancing his career bests.

Why I love this card
In addition to baseball cards, one of the staples of my childhood were Saturday morning cartoons. Whether it was Looney Tunes, Disney or Tom & Jerry many times a character had the proverbial devil and angel on their shoulder. You know, like this:

The two Blue Jays in the background over each one of Gomez's shoulders reminds me of a baseball version of that. Especially with Gomez leering in from the infield with a bat in his hand and a donut on it. I'll let you determine what an appropriate caption would be.

Something else....
Had it not been for Mario Mendoza, George Brett may have entered Luis Gomez into the cultural lexicon. Behind Mendoza, Gomez was the second-worst hitter of the 1970s (.216) and was consistently near the bottom of the Sunday morning batting average listings. In fact, Gomez had a lower career batting average than Mendoza (.210 to .215). Not only did Gomez finish his career with a .210 average, he did not hit a home run and was caught stealing 17 of 22 times.
Posted by Dean Family at 9:10 AM