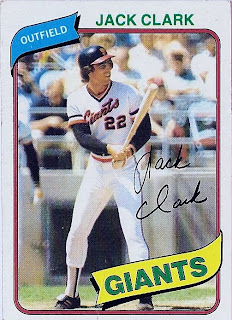 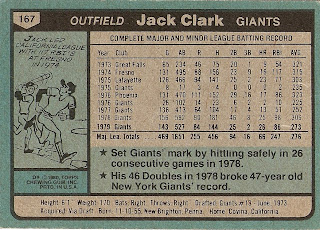 Who is this player?
Jack Clark, rightfielder, San Francisco Giants
One of the games bright young sluggers as the 1980 season began, Jack Clark was enjoying another standout season at the plate. As the Giants number 3 hitter, he led the team in home runs and RBI in 1980 and was gathering a reputation as one of the most feared hitters in the National League. Jack was leading the NL in game-winning hits when he broke his hand in a game against the New York Mets. He missed a month of action, returning near the end of the season. Clark managed only thee RBI in his final 13 games but finished the year at a respectable .284 with 22 HR and 82 RBI.

The righthand hitting Clark was signed by the Giants out of Gladstone High School in Azusa, California in June of 1973. He was originally a pitcher but his hitting led the Giants to switch Clark to an everyday player during his minor league days. After a brief look in 1975, and after 26 games in 1976, Clark became a regular outfielder as a 21-year old in 1977. He had his breakout year in 1978 when the surprising Giants were contenders for most of the season. Clark was the team's All-Star and MVP candidate (finishing 5th) and was among the league leaders nearly every offensive category.

When the Giants slumped in the following years, Clark became the symbol of that decline. While "Jack the Ripper" didn't achieve the Willie Mays-esque success that was unfairly predicted, Clark had a keen eye for the strike zone and a clutch hitter. He spent 10 years in San Francisco, hitting 20+ home runs five times and making the All-Star squad twice. However, during that span, the Giants never finished higher than third in the standings and lost more often than they won.

In February, 1985 Clark was traded to the St. Louis Cardinals for four players. As a Cardinal, he would help lead St. Louis to the postseason in two of his three seasons there (1985 & 1987). Both years, the Cardinals went to the World Series, thanks in large part to Clark. His 9th inning home-run in Game 6 of the NLCS paved the way to the 1985 Series and his 35 HR and 106 RBI paced the Cardinals before he missed the postseason due to injury. Both times, however, Clark and the Cardinals failed to win the championship.

He signed a lucrative free agent contract with the Yankees in 1988 but the season was a disappointment for Clark and he was traded to the San Diego Padres after only one year. His tenure in San Diego was most memorable for the feud he engaged in with Tony Gwynn. He spent the final two seasons of his 18 year career in Boston as the Red Sox' DH. One of the greatest sluggers of his era, he was a four-time All-Star and retired with 340 home runs. He spent some time as a coach with the Los Angeles Dodgers and today is the manager of a collegiate summer wood-bat team, the Springfield Sliders.

Why I love this card
Topps did a fine job in the 1980 set of including many full shots of several players and this Jack Clark card is no exception. Much like some of the other players in this set, Clark is pictured from head to toe in game action. This style of card always commanded extra attention because it had so much more detail than the standard posed or headshot, especially for an American League kid that didn't see much of the NL West. Bonus points for the apparent dog kennel door pictured in the background behind Clark.

Something else....
Chew on this stat - in 1987 when Clark hit 35 home runs for the NL Champion Cardinals, it represented 37% of the team's total (the '87 Cards hit 94). You almost have to go back to Babe Ruth's time to find a similar breakdown and it only happened 22 years ago. Clark seems to be forgotten today. His 1985 NLCS home run has been totally overshadowed by Ozzie Smith's home run that merely gave the Cards a 3-2 series lead. I know that Clark wasn't popular among his teammates and he popped off recently about the 1980's Mets, here and here. Maybe that's why.
Posted by Dean Family at 8:45 PM