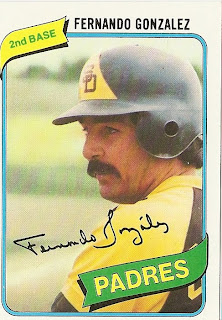 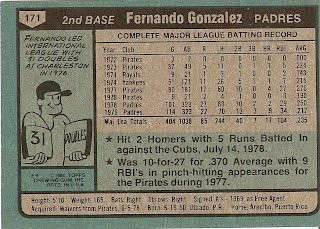 Who is this player?
Fernando Gonzalez, second baseman, San Diego Padres
After achieving career highs in games played, home runs and RBI in 1979, Fernando Gonzalez had completed his second season as the starting second baseman for the San Diego Padres. However, his batting average dropped over 30 points and when the Padres acquired free agent Dave Cash, Gonzalez's status on the club on was in jeopardy. He was released by the Padres in February 1980 and caught on with the Angels' Triple A club at Salt Lake City. He never again appeared in a major league games.

Born Jose Fernando Gonzalez Quinones in Puerto Rico, the righthand hitting Gonzlaez was a draft choice of the Seattle Pilots in 1968. He signed on as a free agent with the Pittsburgh Pirates in 1971 and made his major league debut a year later. Although he only appeared in three games with the Pirates, Gonzalez had an opportunity to play alongside Hall of Famer Roberto Clemente, his idol as a young boy. When Clemente's plane crashed on New Year's Eve, 1972, Gonzalez was one of many that was part of several search parties that went looking for Clemente's body.

Gonzalez would spend the next four seasons primarily in the minor leagues, with the occassional stretches with a major league club. He appeared in 37 games with the Pirates in 1973, nine with the Royals in 1974 and 51 with the New York Yankees, also in 1974. He struggled to bat over .200 during that stretch but was valuable as a late inning defensive replacement. Fernando also honed his skills in the off-season, as he has the distinction of playing for all six teams of the Puerto Rico Winter Baseball League.

He returned to the majors with Pittsburgh in 1977, but earned a starting position when he was traded to the San Diego Padres in 1978. After his six-year major league career ended in 1979, he spent two more seasons in the minor leagues. He made one final comeback in 1984 with the Yankees Double-A squad where he was also doing some coaching.

Fernando returned to action in 1989 as part of the Senior Professional Baseball League and was interviewed for David Maraniss' 2008 book about Clemente.

Why I love this card
You can't really appreciate it by the scan, but this card (like many in this set) is pretty badly cut, or off center. Looking at it today, I am reminded that back in 1980, this didn't matter to me in the least. Granted, I wanted my card to be in as nice shape as possible, but I was just happy to have the card. When did centering become all that important anyway?

Something else....
Gonzalez relayed an interesting story about Clemente in this game at Wrigley Field in Chicago. Eager to learn as much as he could from Clemente, he wondered why Clemente laid off a couple of pitches that Clemente earlier banged for hits. Clemente told Gonzalez to "wait and see." Clemente homered off of Jenkins to win the game, explaining to Fernando that he allowed Jenkins to think that he was "getting tired." Gonzalez claimed that he never saw a player like Clemente who could literally do whatever he wanted on a baseball field.
Posted by Dean Family at 9:14 AM