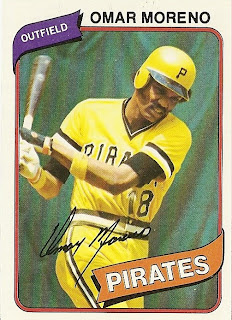 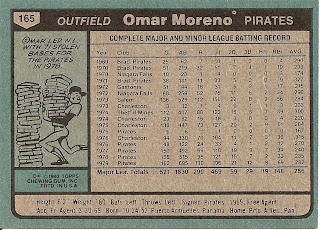 Who is this player?
Omar Moreno, centerfielder, Pittsburgh Pirates
The two-time defending National League stolen base champion, Omar Moreno of the Pittsburgh Pirates was one of the fastest men in baseball. As the 1980 season opened, Moreno's reign was challenged by a newcomer, Ron LeFlore of Montreal. The two traded the league lead several times throughout the summer in a furious race for the crown that hadn't been seen before or since. Moreno entered the final weekend with the lead, but LeFlore nipped him on the final day, 97 stolen bases to Omar's 96. Moreno nonetheless led the league in plate appearances, at-bats and triples. His 96 swipes was the fifth best total in history at that time and still the best mark ever for a runner-up.

Moreno was signed as a 16-year old in 1969 out of Panama. He spent seven seasons in the minor leagues primarily due to the Pirates' wealth of major league outfielders during the 1970s. Minor league coach Maury Wills worked with Moreno on his base stealing and his tutoring paved the road to Pittsburgh. He made his major league debut in September, 1975. and claimed the starting centerfield position in 1977 when Al Oliver was traded. He finished fourth in the league in stolen bases but struck out over 100 times and batted a meager .240.

Over the next five seasons, Moreno stole 343 bases, leading his league in 1978 and 1979. As the leadoff hitter of the 1979 Fam-A-Lee Pirates, Moreno enjoyed his best season, scoring over 100 runs, rapping out 196 hits and batting .282. He batted .333 in the World Series, going 11 for 33 as the Pirates became World Champions. During this period, Omar was consistently among the league leaders in triples, runs scored, and games played. On the other side of the ledger, Moreno was also among the league leaders in caught stealing, strikeouts and outs made.

After 14 years in the Pittsburgh system, Moreno left as a free agent in 1983 to sign with the Houston Astros, who promptly traded him on August 10th to the New York Yankees. He never enjoyed the same level of success that he had in Pittsburgh and the Yankees released him in 1985 with Moreno batting only .194. The Royals acquired him in September for the stretch drive, but he did not appear in the postseason as the Royals went on to win the World Series. He spent his 12th and final season in Atlanta in 1986, reunited with his former Pirate manager Chuck Tanner. He was the Braves rightfielder that season and batted .234, finishing his career with a .252 average and 487 stolen bases.

After his major league career, he worked extensively with the Panamanian National Team. He was manager of the Panamanian National Team for the 2003 Baseball World Cup, where they won a Silver Medal. Omar also had the opportunity to manage his son Omar Jr in the World Cup. Most recently, he was in attendance as the 1979 Pirates celebrated their 30th reunion at PNC Park in August.

Why I love this card
This card reminds me of the 1979 World Series, the first one that I ever recall watching. Omar's wife in particular was a standout in this Series as ABC cameras continually showed her blowing a whistle and shrieking "Sweetie" at Omar. To this day, when Omar Moreno comes up in my Dad's presence, he will say "Do you remember his wife and that damn whistle?" If you are lucky enough to get the DVD copy of the 1979 World Series, you will see what I'm talking about.

Something else....
Moreno was one of the 33 players featured in the Burger King Set. It is pictured here with the glorious pillbox Pirate hat. Like the Willie Wilson card, the text on the reverse of the Burger King card is different than the regular 1980 issue.

Instead of featuring Moreno in a seperate post, the voting booth is open on the right between the two Moreno's. May the best one win. 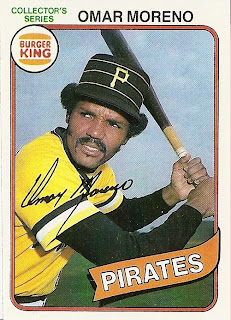 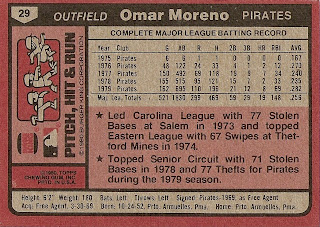