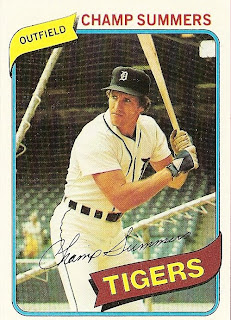 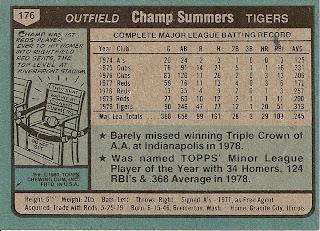 Who is this player?
Champ Summers, right fielder, Detroit Tigers
A popular fan favorite in Detroit, Champ Summers was coming off a strong and surprising performance in 1979 and looked to repeat it in 1980. Used sometimes in right field, but mostly at DH, the lefthanded hitting Summers took advantage of the short porch at Tiger Stadium. Champ batted over .300 for most of the season, with a highlight being a two-home run game against the Twins in June. He finished the year at .297 with 17 home runs and 60 RBI in just 347 at-bats.

Champ Summers road to the major leagues was truly unique. Born John Junior Summers he was tagged "Champ" by his father. According to family legend, the elder Summers said young John looked like he went "10 rounds with Joe Louis" at birth. Champ came from a family of athletes, his mother a professional bowler and his father a prizefighter in the US Navy. A teenage Summers even defeated a young Jimmy Connors in a youth tennis tournament.

However, Summers did not follow a path straight to the majors, he enlisted in the United States Army and served a tour of duty in Vietnam during the Tet Offensive. After his discharge, he played in a men's softball league where he was discovered and signed by the Oakland A's in 1971. The A's brought him up for a brief look but he batted only .125 in a month's worth of action and was traded to the Chicago Cubs.

Summers spent two years in Chicago seeing limited action as was traded again, to the Cincinnati Reds in 1977. He appeared in only 99 games in three seasons and failed to bat .200. He was, however, named MVP of the American Association and Minor League Player of the Year in 1978 when he batted .368 with 34 HR and 124 RBI. The Reds traded Summers to Detroit in May of 1979. It was in Detroit that he received his biggest break. He took over in right field and batted .313 with 20 home runs and 51 RBI in just 90 games.

The Tigers traded Summers to the Giants in 1982 and he never attained the success he enjoyed in 1979 & 1980. He was a part-timer for two seasons and the Giants shipped him to the Padres in 1984. As a veteran pinch-hitter and outfielder, Summers personality was his most valuable asset to the eventual NL Champions. His last game, ironically, was at Tiger Stadium in Game 5 of the World Series. He looks like he knows it here. Today, he owns and operates "Champ Summers' Summer Camp for Champs" a motivational sports retreat for kids.

Why I love this card
Very few cards in this set are the Summer of 1980 for me like Champ Summers. I traded for this card on the playground at school when I wasn't supposed to wrapped in a huge rubber band without a care towards condition or quality. As kids, we couldn't understand why Sparky Anderson didn't play him more often, after all, wasn't 'Champ Summers' an awesome baseball name? It seemed like everybody liked him. My only regret is that I didn't get to sit out in "Champ's Camp" in the right field stands. We all tried to emulate a version of his stance.

Something else.....
For some reason, and I don't know why, it was a big deal that Summers had the Playboy bunny logo tatooed on his shoulder. Also, Summers was a principal in one of the most infamous baseball fights of all time, in 1984. The Padres and Braves "Bean Brawl" was featured recently at MLB.com and you can see footage of it here.
Posted by Dean Family at 8:47 AM