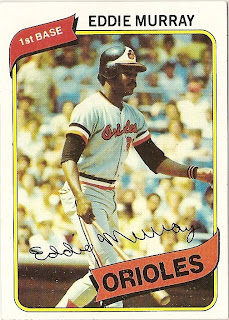 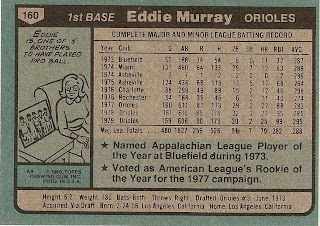 Who is this player?
Eddie Murray, first baseman, Baltimore Orioles
Hall of Fame, Class of 2003
For most kids opening a pack of 1980 Topps, getting this card would make you hesitate for a moment and smile at your good fortune. Eddie Murray was one of baseball's young superstars that summer, a player that many predicted would be a future MVP. The switch-hitting slugger had his first 30HR, 100RBI season in 1980 and also batted .300 for the first time. The Orioles, led by Murray, valiantly defended their AL East title that season, winning 100 games but were edged out for a playoff spot by the New York Yankees. When the season concluded, the Orioles wisely signed Murray to a long-term, multi-million dollar contract.

A Los Angeles, California native, Eddie Murray went to Locke High School where he was a teammate of fellow Hall of Famer Ozzie Smith. He was only 17 when he graduated high school and was a third round selection by the Baltimore Orioles in 1973. It was in the minors in 1975 when Murray began to switch-hit against the wishes of the parent club. The experiment was a success and ultimately earned Murray his ticket to Baltimore. Murray was initially the Orioles designated hitter in his rookie season (1977) and earned the AL's Rookie of the Year award after he batted .283 with 27 HR and 88 RBI in 160 games.

Murray was a consistent run producer during his tenure in Baltimore, averaging nearly 100 RBI a season for twelve years, earning his nickname "Steady Eddie." He led the American League in home runs and RBIs during the strike-shortened 1981 season and established himself as one of the preeminent offensive players of his era. Meanwhile, the Orioles appeared in two World Series, winning in five games against the Phillies in 1983. While he never earned the MVP award predicted of him, Murray finished second twice and received the most lifetime MVP votes of anyone who never won the award. Murray is also only one of five players to finish in the top 5 in MVP voting for five consecutive years.

After the Orioles collapsed in 1988, Murray was traded to his hometown Los Angeles Dodgers. He spent three seasons in Dodger-blue where he continued his All-Star status and averaged 22 HR and 93 RBI. From there, Murray spent most of the 1990s moving to five different teams in six seasons. After a short stint with the Mets, he was the veteran influence that helped lead the Cleveland Indians to the World Series in 1995. That was also the season Eddie collected his 3000th hit. The following season, he hit his 500th home runs in his return to Baltimore. He split the 1997 season between the Angels and Dodgers, the final one in his 21-year career.

Murray finished his career by playing more games at first base than anyone in history. He is 8th all-time with 1917 RBI and is one of only four players in history with 3000 hits and 500 home runs. He holds the career record for most sacrifice flies and homered from both sides of the plate in a record 11 games. Eddie served as a coach for both the Indians and Dodgers in retirement as was elected to the Hall of Fame in 2003 on 85% of the ballots in his first year of eligibility.

Why I love this card
Eddie Murray's career was taking off at the precise moment I was becoming a fan of the game. His was a popular card among the kids in the neighborhood and I was lucky enough to get his card early in the season. Louie down the block pestered me to trade him this card for most of the summer until I finally did, for a 1970 Vida Blue rookie card. I can't overstate enough how important that was; since in those days it was rare that someone would even have a card from 1970 let alone trade you one. I never got another Murray card that summer, but it was worth it.

Something else....
I didn't realize that Murray had the highest batting average in baseball in 1990 while with the Dodgers but was not recognized as a batting champion. This happened when Willie McGee of St. Louis was traded mid-season to the Oakland A's, batting .335 with enough plate appearances to qualify for the NL title. Although McGee's mark held up to lead the league, his subpar performance with Oakland brought his overall season average lower (.324) than Murray's .330 mark.
Posted by Dean Family at 6:09 PM