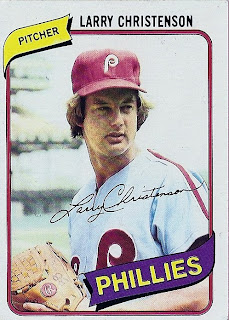 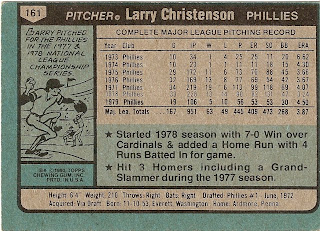 Who is this player?
Larry Christenson, starting pitcher, Philadelphia Phillies
Hoping to rebound from injuries in 1980, Larry Christenson was a young veteran on the Philadelphia pitching staff. Only 26 years old, he was already entering his eighth campaign and the Phillies were hoping Larry could return to form. He began the season 3-0, but his ERA was over six runs a game and it was found that there was a spur in his elbow that required surgery. He returned to the team in mid-August, in time to help the Phillies win the NL East title. Larry started Game 3 of the NLCS and engaged in a pitching duel with Joe Niekro but did not factor in the decision. When Philadelphia advanced to the World Series, Christenson started and lost Game 4 but the Phillies went on to become World Champions.

As a teenage fireballer out of Marysville, Washington, the righthanded Christenson made his debut in 1973, a complete game victory over the eventual NL Champion New York Mets. He would bounce back and forth from the majors to the minor leagues until 1975, when the Phillies called him up to stay. Christenson would become one of the primary reasons Philadelphia dominated the NL East, winning three straight divisional titles 1976-1978.

Christenson won 45 games during that period, with a high water mark coming in 1978 when he was 19-6. He also demonstrated excellent control as he led the league in walks per nine innings in 1978 as well. However, Christenson did not come up big in the post-season as the Los Angeles Dodgers roughed him up in both starts he made in the NLCS in 1977 and 1978.

Then, injuries would begin to plague Christenson's career. He began the 1979 season on the disabled list when he broke his collarbone during a charity bicycle ride and missed the first month. Then, in June he developed elbow problems and missed several weeks. He ended up with a 5-10 record in 1979. In 1981, Christenson was only 4-7 record and made only 15 starts. However, he had his only postseason win against the Expos in the NLDS. His last uninterrupted season was 1982, when he made 32 starts and went 9-10, but he still suffered back spasms.

Christenson's eleventh and final season was 1983 when elbow problems recurred and he was released on his birthday. Larry spent two years rehabbing his arm hoping to return to the major leagues but it was not to be. He entered the world of institutional investing and currently is president of Christenson Investment Partners. He is a fixture at Phillies reunions and special events and is involved in many charities in the greater Philadelphia area. In 2009, he offered a unique perspective on how the 2008 Phillies would have fared against their 1980 counterparts:

Why I love this card
The zip-up Phillies jersey pictured here. In the era of the pullover synthetic polyester, the zipper across the front was unique. As a kid, I even ordered a Phillies road-uni from the J.C. Penny catalog because I erroneously thought it had a zipper. It's just too bad that Christenson couldn't have had his card photo taken in this: 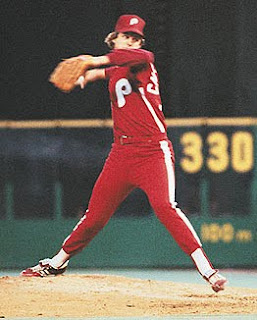 Something else....
Christenson had unusual pop in his bat for a pitcher. He hit 11 career home runs, which is the most ever by a Phillies pitcher. He two homers in a 1976 game against the Mets and hit a grand slam against the Cubs on the day they clinched the 1977 NL East flag.
Posted by Dean Family at 10:54 PM