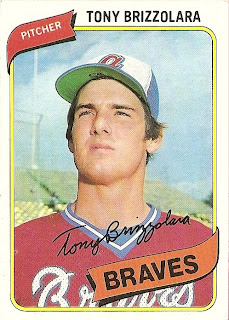 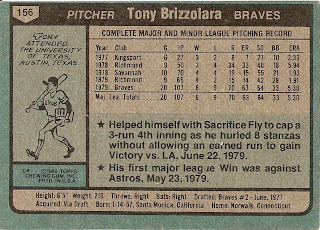 Who is this player?
Tony Brizzolara, starting pitcher, Atlanta Braves
During the 1980 season, as we were getting Tony Brizzolara's rookie card, he was spending the year in Triple-A Richmond. Tony missed out on making the Braves near the end of Spring Training as there was not a spot for him in the rotation. Rather than have him sit in the bullpen, the Braves felt it was better for the 23 year old righthander to get regular work in the minors. He was 10-15 in Triple-A with a 3.71 ERA but did not earn a promotion back to the major league level in 1980.

Born in Santa Monica, California, Brizzolara's family moved to the Wisconsin area where Tony graduated from Beloit Memorial High School. He was a high school star and earned a spot on the team at the University of Texas. He spent only two years as a Longhorn as he was drafted by the Braves in 1977 and reported to Kingsport in the Appalachian League. The following season he rose quickly in the minor league ranks, starting the year in Single-A and finishing the year in Richmond.

In 1979, he pitched well in nine games in Richmond, posting a 1.91 ERA. When Larry McWilliams went down with an injury, Brizzolara took his spot in the starting rotation. He made 19 starts in 1979, winning six and posting a 5.28 ERA. He had two complete game victories that season, against the Cardinals in Padres. After his season in the majors, Tony would return to Richmond for the next four seasons, patiently awaiting his return to the majors. In the interim, he won 44 games but Richmond lost in the International League finals in both 1981 and 1983.

Brizzolara's determination was rewarded in late-1983 when he was added to the Braves roster, finally returning to the major leagues. He appeared in 14 games, all in relief and recorded a 3.54 ERA. He started 1984 in Richmond again and was called up to Atlanta again, this time for the last time. He started a few games and relieved in a few more, but did not have much success. It would be the third and final season of his major league career. However, Tony would pitch two more seasons in the minors before finally calling it quits in 1986.

In all, Brizzolara spent eight seasons (1978-85) with the Richmond Braves and still holds many of the their career pitching records. A fast worker on the mound, "Brizz" tops the list in wins (68), innings pitched (1,060), strikeouts (613), games started (158), and complete games (40). Today, Brizzolara is a minority owner, executive vice president and chief operating officer of an actuarial firm in Atlanta. Actuaries deal with statistical risks and life expectancies for insurance; Brizzolara specializes in pension plans. He has also made several appearances at Turner Field as part of the Atlanta Braves alumni association.

Why I love this card
As a kid, you can't help but love the name "Brizzolara." His signature reminds me of the scene in Billy Madison where Adam Sandler is trying to write the word "Rizzuto." Other than those two, how many other major leaguers have two Z's in their name?

Something else....
Earlier this year, blog follower Bo Rosny posted a great story about Brizzolara over at his website, Baseball Cards Come To Life! Its a great tale of what happened to Brizzolara's baseball card collection.
Posted by Dean Family at 10:54 PM