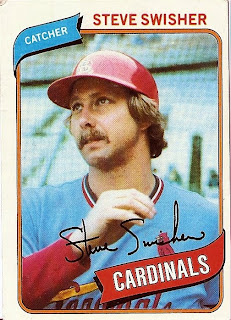 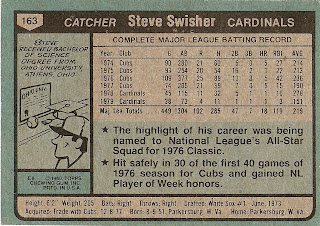 Who is this player?
Steve Swisher, reserve catcher, St. Louis Cardinals
With catchers Ted Simmons and Terry Kennedy ahead of him on the St. Louis Cardinals' depth chart, Steve Swisher did not see much major league action in 1980. While he was on the major league roster for the entire season, Swisher only appeared in 18 games and batted .250 (6 for 24). He only started four of those games, but was a .300 batter (3-10). At the end of the season, new manager and GM Whitey Herzog sent Swisher to San Diego as part of a multi-player deal and briefly brought Rollie Fingers to St. Louis.

An All-American at Ohio University, the righthanded hitting Swisher was a first round pick of the Chicago White Sox in 1973. He spent that season in the White Sox farm system until he was part of a package of players traded to the Chicago Cubs for longtime fan favorite Ron Santo. He made his major league debut with the Cubs in June, 1974 less than one year after he was drafted professionally.

Swisher struggled at the plate in 1974, and the following season he was given special attention by Cubs hitting instructor and former batting champion Lew Fonseca. However, Fonseca's tutelage did not reflect in Swisher's average as he batted .213 with less home runs and RBI as the year before.

The following year, 1976, was the highlight of Swisher's career. He was the Cubs starting catcher for most of the season and he was selected to the All Star Game. He was apparently selected since he hit well against Cincinnati and the Reds' Sparky Anderson selected the reserves. Swisher did not play in the NL's 7-1 victory, a decision that earned Anderson criticism in the Chicago press. Swisher finished the year batting .236 and had career highs in nearly every offensive category.

Swisher lost his starting job with the Cubs in 1977 and never regained the starting position. He was traded to St. Louis in December and spent three seasons as Simmons little-used understudy. The final two seasons of his nine year career came as a San Diego Padre. In 42 games over two seasons, he batted a meager .163. Steve spent most of the 1980s and early 1990s managing in the minor leagues winning several league championships. His son Nick is currently an outfielder with the New York Yankees, and father and son have helped raise money for cancer patients after Steve's mother died of the disease in 2005.

Why I love this card
OK, so Swisher wasn't much of a hitter in his career. He was an solid defensive player, but Topps saw fit to picture him after he just got a hold of one. Whether it was a fungo or batting practice, Swisher's gaze suggests that he hit the ball really, really far. Either that or Swisher just saw a picture of his daughter-in-law.

Something else....
In Project 1976's blog entry on Swisher, he included this video of Steve and Nick you can find here. Maybe its just me, but when Nick is speaking, Steve has the same look that my Dad did when I told him that I ran over the hose with the lawn mower.
Posted by Dean Family at 11:36 PM