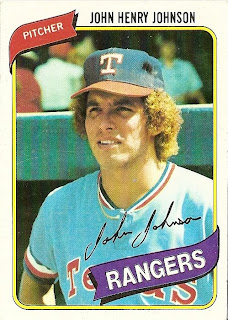 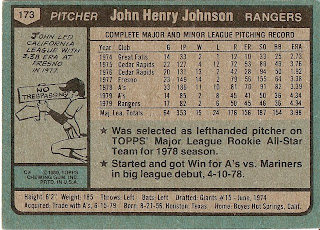 Who is this player?
John Henry Johnson, relief pitcher, Texas Rangers
A young lefthanded pitcher with future potential, John Henry Johnson did not make the Texas Rangers out of Spring Training in 1980 and began the season at Triple-A Charleston. He was called up to the Rangers at mid-season and was used as a setup man and sometimes closer. In 33 appearances, he won two games, saved four and posted an impressive 2.33 ERA. Over the last month of the season, he allowed only two runs in his final 14 appearances and earned a spot on the Rangers pitching staff for 1981.

A Texas native that moved to California as a boy, Johnson is also very proud of his Native American heritage. He didn't begin playing organized baseball until high school, but was an impressive athlete in almost every sport and learned the game quickly. He gathered attention from major league scouts and he was a late round pick of the San Francisco Giants in 1974. After an adjustment period, Johnson went 27-4 in two seasons in Single-A ball and suddenly was one of San Francisco's top pitching prospects. The Giants reluctantly included him as part of a package of players to the Oakland A's for Vida Blue.

Promoted quickly to the major league level, the 21-year old Johnson was immediately inserted into the A's starting rotation in 1978. He responded with his best season, winning 11 games for an Oakland team that lost 93 games. He led the team in shutouts and complete games and posted a 3.39 ERA. His best performance came in late May when he pitched a three-hit shutout against the Chicago White Sox. He was also named to the Topps 1978 All Rookie Team.
He began the 1979 season poorly, winning only two of ten decision with Oakland before Charlie Finley shipped him to the Texas Rangers. He was placed into the Rangers rotation, but his fortunes did not improve in Arlington and he finished the season with a combined 4-14 record.

Johnson spent the remainder of his eight-year career as a journeyman relief pitcher with the Rangers, Red Sox and Brewers. He spent the entire 1982 & 1985 seasons in the minor leagues and he developed the reputation of being a "thrower" and never learning how to become a "pitcher." Nevertheless, Johnson was an effective setup man for the second half of his career, typically appearing in 25 games a year in a variety of roles and posting a decent ERA and WHIP. His career ended in 1987.

Why I love this card
I'm a sucker for cards taken at Tiger Stadium and this is one of them as evidenced by the blue cement dugout behind Johnson. Also notice the Tiger Stadium usher in the background with his back to the camera and the orange hat. Seeing the occasional card photographed at your home park just further strengthened my bond with the game and these cards. Bonus points for the Harpo Marx hairstyle, even though I thought Johnson was copying Mark Fidrych at the time.

Something else....
Much like Bill Russell, when I was a kid, I had no idea that there was another John Henry Johnson in another sport that achieved Hall of Fame status. To this day, when I hear the name, my mind instinctively goes to this guy.
Posted by Dean Family at 1:07 PM