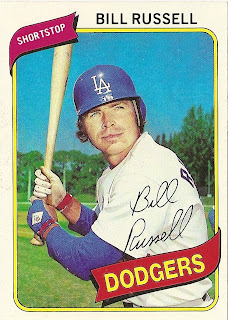 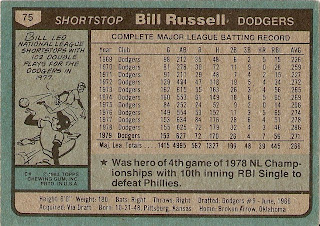 Who is this player?
Bill Russell, shortstop, Los Angeles Dodgers
As part of the famous Dodger infield that consisted of Davey Lopes, Ron Cey and Steve Garvey, by 1980, Russell was already a institution in Los Angeles. He was hitting over .300 for most of the first half of the 1980 season and that earned him a starting position on the National League All Star team at Dodger Stadium. He slumped somewhat during the second half and missed most of September due to a fractured finger. The Dodgers lost the NL West in a one-game playoff to the Houston Astros.

A right-handed batter and thrower, Russell came to the Dodgers as a 20-year-old outfielder in 1969, where his first two seasons were spent (veteran Maury Wills was a short). During the 1970-71 offseason, Russell was converted to a second baseman, and the following year to shortstop, becoming the regular in 1972. He played in every game in 1973, was named to his first All Star Game, and even received minor MVP consideration.

He helped lead the Dodgers to the World Series in 1974, but the Dodgers lost in five games. Injuries derailed his 1975 season, but he had a strong 1976 season, and was named again to the All Star team. In 1977-78 the Dodgers made back-to-back appearances in the World Series, even collecting 11 hits and batting .423 in the 1978 Classic. Unfortunately the Dodgers lost both years to the New York Yankees. During this time Russell began to gather a reputation as a clutch hitter. The Dodgers finally broke through in 1981 finally turning the tables on the Bronx Bombers to claim the championship. In four World Series appearances, Russell batted .263.

Russell and the Dodgers returned to the postseason in 1983, but by then, Lopes, Cey and Garvey were all gone and the Dodgers lost the NLCS to the Phillies. He finally lost his regular position the following season and completed his 18-year career (all with the Dodgers) in 1986. He immediately became a coach on Tommy Lasorda's staff and eventually became manager of the Dodgers triple-A affiliate. He then rejoined Lasorda and the Los Angeles coaching staff in 1994 and was considered by many the heir apparent to Lasorda's job. In June 1996, the 68-year-old skipper suffered a mild heart attack and Russell was named acting manager. He took over from Lasorda for good on July 29. He remained Dodger manager until 1998 when new ownership cleaned house in LA.

Russell continued to coach at the major league level with the Tampa Bay Devil Rays and manage in the minor leagues. Today, he works with Major League Baseball in the umpiring division. He remains one of the most popular Los Angeles Dodgers of all time.

Why I love this card
For the longest time as a kid, whenever I heard the name "Bill Russell," this was who I thought of. I was aware of the Boston Celtic superstar, but my mind jumped to this guy first. He was always my favorite of the famous infield, probably because he was the least heralded.

Something else....
Only Hall of Famer Zack Wheat appeared in more games as a Brooklyn/Los Angeles Dodgers than Bill Russell. He is fourth all time in team history in at-bats, sixth in hits and third in singles.
Posted by Dean Family at 10:30 PM