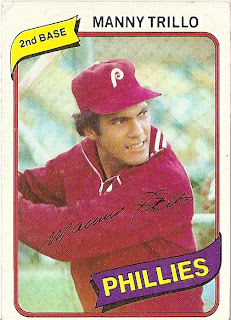 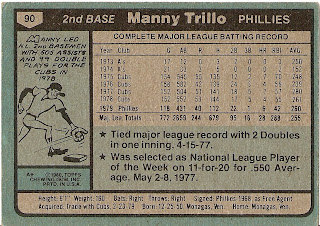 Who is this player?
Manny Trillo, second baseman, Philadelphia Phillies
Acquired prior to the 1979 season, Trillo solidified a Phillies infield that was widely predicted to win the NL East. Philadelphia disappointed that year, and Trillo missed over a month with a broken wrist. Despite that, Trillo still earned the Gold Glove. In 1980, Trillo won the Silver Slugger at second base as he hit a career high .292 and helped lead the Phillies to the NL East title. In the NLCS he hit .381 in their win against Houston and was named the MVP. The Phillies rode that momentum to their first World Series championship.

Originally signed by the Phillies in 1968, he was selected by the A's a year later as a Rule V choice. In the minors, Trillo developed his reputation as a solid hitter and an outstanding glove man. His defensive prowess got had the attention of his owner, Charlie Finley. Finley badly wanted Trillo on the postseason roster and Manny unwillingly found himself in the middle of controversy in the 1973 World Series. During Game 2, A's second baseman Mike Andrews made two crucial errors and Oakland lost the game. Finley essentially fired Andrews and wanted to replace him on the roster with Trillo. The move was not allowed by the Commissioner.

At the end of the following season, Trillo was traded to the Cubs for future Hall of Famer Billy Williams. He was instilled at second base and became a reliable player and popular for the Cubs for the next four years. He placed in the Rookie of Year voting in 1975 and was the Cubs representative in the 1977 All Star Game.

Trillo won three Gold Gloves with Philadelphia and again helped lead the Phillies to the playoffs in 1981. They were unable to successfully defend their title when the lost the NLDS to the Montreal Expos. The following season, Trillo was selected to start the All Star Game for the NL and he set a major league fielding record. However, at the end of the season, the Phillies traded him to the Indians in a package for the highly-touted Von Hayes. He was again selected to start the All Star Game, this time for the AL, and was Cleveland's first All Star starter in 15 years. The Indians did not keep him long as Trillo would be a free agent at the end of the year and they shipped him to the Montreal Expos.

He signed a contract with the San Francisco Giants in 1984 and spent two years by the Bay before he was traded back to the Chicago Cubs. He spent the three seasons (1986-1988) as a utility infielder in Chicago, twice hitting over .290. Manny briefly appeared with the 1989 Cincinnati Reds where he batted only .205 in 17 games and was released, ending his 17-year career. In recent years, Trillo was served as a minor league coach in the Cubs, Phillies, New York Yankees, and Milwaukee Brewers organizations. He is currently an infield instructor in the Chicago White Sox farm system.

Why I love this card
Yes, I wanted the Astros to win the ALCS in 1980. And yes, I wanted the Royals too. However, I learned at a young age that if a team was to be successful they had to have a guy like Trillo around. His performance in the postseason this year was very impressionable to me. Not a superstar in mold of Rose or Schmidt, but no less valuable to the overall team effort. From then on, guys like Trillo (solid defensively, clutch hitter, doing little things well) had always caught my attention.

Something else....
As much as I respected Trillo, I was pissed at him for being named as the starter in the 1983 All Star Game. Lou Whitaker was among the league leaders at the break in batting and was coming into his own as a star player. I really wanted him to be the starter and stuffed the ballot box, going so far as to take several ballots from the Gillette display at Great Scot! supermarket and personally deliver them to Tiger Stadium on Kids Day. Oh well, at least Manny got to be on base when Fred Lynn delivered his historic grand slam.
Posted by Dean Family at 11:07 PM