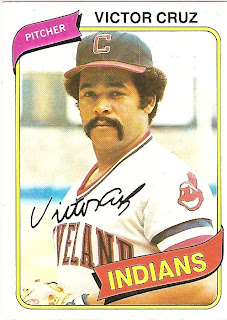 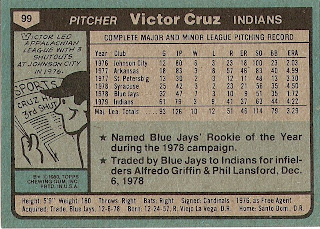 Who is this player?
Victor Cruz, relief pitcher, Cleveland Indians
Following a 1979 season that saw him post a losing record (3-9) and high ERA (4.23), the righthanded Cruz served as a setup man to closer Sid Monge. Despite his 4.00+ ERA, he was one of the most durable and reliable pitchers on the team and he was expected to resume his role as setup man in 1980. When Monge faltered, Cruz stepped in and shared the position with Monge. Victor posted the best ERA on the team (3.45) and finished with 12 saves. The Indians decided to capitalize on Cruz's marketability and included him in a package to Pittsburgh in the Bert Blyleven deal.

Discovered as a amateur free agent in 1976, Cruz was originally signed by the St. Louis Cardinals. His windup and delivery was reminiscent of contemporary Luis Tiant. After an impressive season in the Rookie League, Victor had a solid start to his 1977 season in Single-A. Moved up in mid-season, he struggled at Double-A Arkansas and at the end of the year, the Cardinals included him in a package that made Pete Vuckovich a Cardinal. Cruz had been traded to the Toronto Blue Jays. Even though he began the season in the minors, the pitching-starved Blue Jays called him up and he made his major league debut on June 24, 1978.

Cruz pitched exceptionally during his first season. He was unscored upon in his first 13 appearances, winning two and saving six. In all, he would only be scored upon seven times in 32 total appearances. He won seven, finished with nine saves and finished 23 games. He posted an impressive 1.71 ERA, all in his rookie season and was recognized as Blue Jays pitcher of the year at the conclusion of the season. Desperate for everyday players, however, the Blue Jays traded him to the Cleveland Indians for shortstop Alfredo Griffin, who would go on to win the Rookie of the Year award in 1979.

Despite his strong 1980 season, the Pirates had several quality in the arms in the bullpen and he failed to make the Pirates roster in 1981. After a month in Triple-A, he was recalled and spent the remainder of the season with the Pirates. He appeared in 22 games and notched a 2.65 ERA. The crowded bullpen situation eventually found Cruz traded again, this time shortly before the 1982 season to the Texas Rangers. He did not appear in a major league game in 1982, but returned in late 1983, appearing in 17 games. Despite notching an impressive 1.44 ERA, he was saddled with three losses. He pitched in the minor leagues for two more seasons (1984-1985) but he never returned to the major leagues, ending a five year career.

Why I love this card
So many things. The fu manchu on full display should be enough, so should his signature that looks like "Vrito Ash". However, the first appearance of Chief Wahoo makes this an impressive card. During this era, he didn't appear on the Indians hats so the only way you could see this logo was through the Fleer Stickers from this era. Good to see him make an appearance.

Something else.....
In reviewing Cruz's career, I can't understand why he had such troubling sticking on a major league pitching staff. He did well in relief and never had a "bad" season per se. Likewise, I cannot find any information as to how he died at such a young age (46). Any information that can solve these mysteries would be most appreciated.
Posted by Dean Family at 5:55 PM