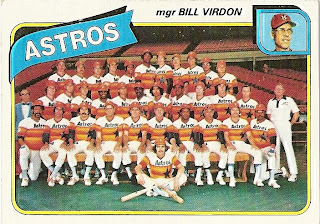 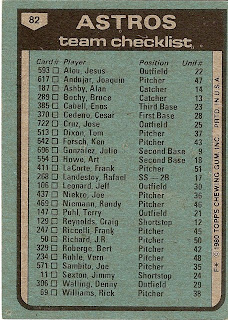 Virdon was entering his sixth season as Astros manager. A strong showing in 1979 led some to believe they could win the NL West crown in 1980, but there was concern about their hitting. That concern, however, was alleviated by their pitching. And boy could the Astros pitch.

They had a 20-game winner in Joe Niekro, 1979 All-Stars Joaquin Andujar and Joe Sambito, solid veterans in Ken Forsch and Vern Ruhle, and the most dominant right-handed pitcher in the league, J.R. Richard.

Then they signed free-agent Nolan Ryan.

Ryan became the highest paid player in the game when he left the Angels to join the Astros and the starting rotation became that much tougher. The Astros would predictably lead the league in ERA (3.11) in 1980.

They also added veteran second baseman Joe Morgan to add leadership and spark to the offense. Morgan would join a lineup that included Alan Ashby at catcher, Art Howe at first, 1979 All-Star Craig Reynolds at shortstop, and Enos Cabell at third. In the outfield, they were led by Jose Cruz, a 1980 All-Star, Cesar Cedeno (.309 10 73), and the dependable Terry Puhl (who was featured on the wax box for 1980 cards) 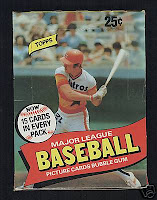 Houston found themselves in a tight battle for the division crown all season with the Los Angeles Dodgers and briefly, the Cincinnati Reds. The Dodgers and Astros were tied for first at the All-Star break, but the team received a devastating blow when they lost Richard for the season when he suffered a stroke. However, the Astros showed their mettle by never wavering throughout the summer and into September and held a three game lead in the West with three games to play against the Dodgers.

Los Angeles won all three games to force a one-game, winner take all playoff. The Astros rebounded to win the game and the division behind a masterful performance by Niekro. The win was costly however, as Houston lost Cesar Cedeno for the NLCS agains the Phillies.

The 1980 NLCS still ranks as one of the most exciting post-season series of all time. Four of the five games went into extra innings, including the classic deciding Game Five. With Ryan on the mound and a 5-2 lead in the eighth inning, the Astros lost the lead, tied it up and fell in the tenth inning. Even though they lost, the Astros earned a respect in defeat that they had never earned before. It was a valiant effort.

In all, 1980 was the greatest season in Astros history up to that point.

Why I love this card
The two guys at the end of the first row (Cliff Johnson and Bob Watson) weren't even allowed to sit down. Now I know that they weren't members of the team in 1980, but couldn't they have at least found a longer bench? As an aside, Virdon was born in Hazel Park, Michigan - the fourth card in a row to feature a guy with Michigan ties. At least it's cool to me.

Something else....
The Astros only used 13 pitchers in 1980. The whole year. That includes J.R. Richard who didn't appear in much of the second half. To show how the times have changed, the Los Angeles Dodgers, who at this writing have the best record in baseball, have already used 19 pitchers.
Posted by Dean Family at 11:35 PM