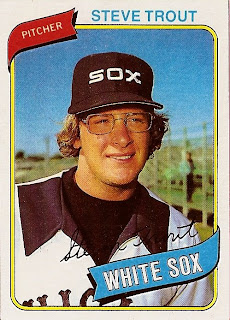 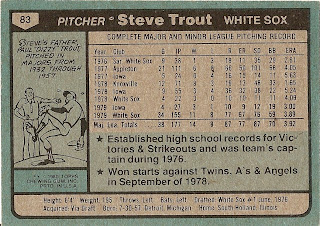 Who is this player?
Steve Trout, starting pitcher, Chicago White Sox
"Rainbow" had earned his way into the White Sox starting rotation in 1979 going 10-5 since as a starter since July 1. He was part of an influx of young starting pitchers that the Sox were hoping would carry them into the 1980s. He struggled a bit in 1980 and finished with a losing record (9-16) but he lowered his ERA from the previous season. A highlight came in June when he and Rudy May of the Yankees both flirted with no-hitters in the same game. When the season ended, there were still high hopes on the South Side for the young lefthander.

The son of former Detroit Tiger Paul "Dizzy" Trout, Steve carried on the family tradition. Dizzy would pass away from cancer in 1972, four years before the White Sox selected Steve in the first round of the amateur draft. He would be in the major leagues for a brief look a little more than two years later at the end of the 1978 season.

He rebounded in the strike-shortened 1981 season and had an ERA under 3.00 until his final two starts of the year. However, he was inconsistent the following season, at one point even demoted to the bullpen. The Sox had grown impatient with his inconsistency, and he and Warren Brusstar were traded to the Cubs for a package of players that included veteran Dick Tidrow. It was as a Cub that Trout enjoyed the greatest success of his career.

In the Cubs' magical season of 1984, Trout led the team in innings pitched and games started. He was the Cubs #2 starting pitcher behind Cy Young winner Rick Sutcliffe as Chicago appeared in the postseason for the first time in 39 years. He was the starter and winner in Game 2 of the NCLS against the Padres, dominating them in a 4-2 win. He appeared in the decisive Game 5, but by the time he did it was too late as the Cubs lost the series. He started quickly in 1985, but was felled by an injury. Inconsistency marked the 1986 season and in 1987 he was traded to the New York Yankees.

Trout's stock could not have been higher prior to the trade as he had just pitched two consecutive complete game shutouts. However, he did not fare well in New York who had acquired him for the stretch drive and he failed to win a game. It was around this time that Trout seemingly lost the ability to consistently throw strikes. It was an issue that would eventually lead to the end of his career. Trout was traded again, to the Seattle Mariners where he spent the final two seasons of his 12 year career.

Why I love this card
Fourth of July weekend, 1980. Family get-together/BBQ at my grandparents house. My cousin Ann-Marie who is about four years older than me (and was always so much cooler than all of us little kids) is looking at my cards. She gets to this Trout card and says "Oh, he is so cute!" At that very moment, my cousin stopped being cool and I still laugh every time I see a Trout card. Additionally, there is a mistake on this card as Trout's father Dizzy began his career his 1939 not 1932 as stated here.

Something else....
Trout attempting a comeback with the Pittsburgh Pirates in 1997. It didn't pan out. Today, he runs his own website, where he sells such items as a "Lesson Ball" and a behinds the scenes DVD of the 1984 Cubs.
Posted by Dean Family at 8:00 AM