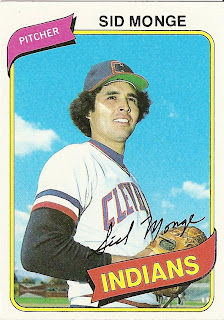 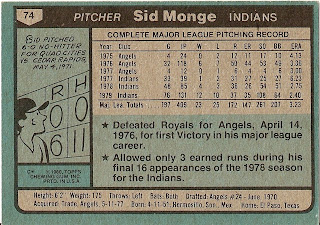 Who is this player?
Sid Monge, closer, Cleveland Indians
The 1979 Indians All Star Game representative, Monge pitched in 76 games in 1979 (second in the league) winning 12, saving 19 and fashioning a 2.40 ERA. He was named the Player of the Month in July and the Indians won 11 stright games he appeared in. He was again the Tribe's closer in 1980, but Monge and the Indians did not attain the same level of success. He still finished third in his league in games pitched (67) and eighth in saves (14) but his ERA was up nearly a run a game and the Indians did not improve in the standings.

Isidro Pedroza Monge was born in Mexico, one of only 66 pitchers to make the majors from that country. The left-handed Monge was originally drafted by the California Angels in 1970 and pitched a no-hitter the following season with the Quad City Angels. He was given a brief major league look late in 1975 and did well enough to earn a spot on the pitching staff in 1976. He pitched as a swingman that season, the only time in his career he was used multiple times as a starter.

He started the 1977 season with the Angels but was traded to the Indians in May and it was in Cleveland that he enjoyed the greatest success of his career. In 1978, he served as the setup man for closer Jim Kern and his success in that role partially led to Kern's trade. He remained the Indians closer for three seasons until he lost his position in 1981. He was then traded in February 1982 to the Philadelphia Phillies.

With the Phillies, Monge served very well again as a setup man, winning 7, losing one and fashioning one of the best ERAs on the team. However, the following season(1983) the Phillies had an abundance of left-handed relievers and he was traded again, this time to the San Diego Padres. His time in San Diego was short as he was again on the move by mid-season 1984 when he joined the Detroit Tigers. Monge was the final piece of the World Champions that year but he did not see any post season action. He pitched in the minor leagues in 1985, but he never returned to the big leagues and his 10-year career came to an end.

In 2004, Monge was elected to Mexican Baseball Hall of Fame and has had a second career as a coach in the minor leagues. After several years in the Cardinals organization, he is currently the pitching coach of the Sultanes de Monterrey of the Mexican Summer League. There is also an active Sid Monge fan club and his daughter plays softball at the University of Arizona.

Why I love this card
It's not because Monge gave up Frank Robinson last home run. It's not because Monge gave up Tony Gwynn's first hit. It not even because he was a 1984 Tiger. It's the subliminal advertising in the lower left hand corner. Much like the Dave Cash-Marlboro connection, there is a Budweiser sign in the background. I would have expected to see that on a Cardinal card first.

Something else...
On September 30, 1976, the Chicago White Sox tried a different approach against California‚ using a lineup in numerical order by field position. The batting order is: Downing-2: L. Johnson-3: Stein-4: Bell-5: Dent-6: Bannister-7: Lemon-8: Hairston-9. Finishing off the lineup is 53-year-old DH Minnie Minoso. Monge and the Angels still win 7-3.
Posted by Dean Family at 11:18 PM