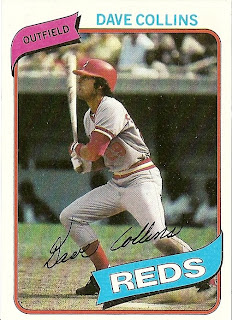 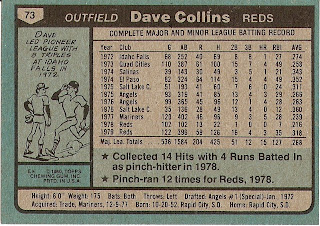 Who was this player?
Dave Collins, centerfielder, Cincinnati Reds
The switch-hitting Collins won the Reds centerfield job with his outstanding work as a substitute in 1979, first spelling George Foster. When right fielder Ken Griffey was lost for the season in August with a knee injury, Collins stepped into the lineup as the Reds leadoff hitter and helped lead them the to the NL West title. His performance moved veteran centerfielder Cesar Geronimo to the bench and Collins became the regular. Collins finished 1980 eighth in the league in batting (.303), seventh in runs scored (94) and third in stolen bases (79).

Collins was drafted in the 1st round in 1972 out of Mesa Community College by the California Angels and his speed was his greatest asset as he quickly moved through the minors. He made his major league debut for the Angels on June 7, 1975 and established himself as a regular outfielder in Anaheim. However, the Angels did not protect him in the 1976 expansion draft and Collins was selected by the Seattle Mariners. He entered the history books by becoming the very first batter in Mariners history. He also scored the team's first ever run. He only spent one season in Seattle before being traded to the Reds.

When he slumped in 1981, the new ownership of the Reds allowed Collins to leave as a free agent. He signed a lucrative contract with the New York Yankees as part of George Steinbrenner's failed "Bronx Burners" experiment. His time in the Bronx lasted only one season as a crowded outfield situation found him traded to the Toronto Blue Jays.

In Toronto, Collins provided the spark on an emerging Blue Jay team that was finding itself competitive for the first time in team history. As Toronto's left fielder in 1984, Collins batted .308, led his league in triples (15) and finished second in stolen bases (60). The Jays won 89 games but finished a distant second to the eventual World Champion Detroit Tigers. Desperate for bullpen help, the Blue Jays dealt Collins to the Oakland A's for closer Bill Caudill prior to the 1985 season. He lasted just one season in Oakland before being traded again, to old manager Sparky Anderson in Detroit for Barbaro Garbey. He would hit .270 and steal 27 bases in what would be his final season as a regular everyday player.

He spent 1987-1989 playing for old teammate Pete Rose as he returned to Cincinnati. Used as a fourth outfielder/pinch hitter by the Reds this time, he found some success in the role, hitting .294 in 1987 but his average dropped to .236 in 1988 and 1989 and he was released. He played one last season, in 1990, with the St. Louis Cardinals, ending his 16-year career. In retirement, he served as first base coach for the Cardinals, Rockies and the Reds

Why I love this card
I mentioned this before, but it's funny what you remember. This card reminds me of an argument I had with my neighbor John-John who lived in the house behind me. As kids, the cartoons were always of interest to us and this one talks about Collins' triples in the minor leagues. John-John was insistent that Topps made a mistake on the card since he had more than the 12 listed. I said that "Maj. Lea. Totals" was indeed correct. It was a pretty hellacious argument complete with "fool," "moron," and "dum-dum." I know I was right but I'm more amazed now I was involved in an argument without swearing.

Something else....
Collins was the boys varisty baseball and basketball coach at Lake Orion High School in my area. I always thought that it was strange especially since Collins wasn't from Michigan originally. It must have been some connection that he made during his playing days with the Tigers.
Posted by Dean Family at 10:17 PM