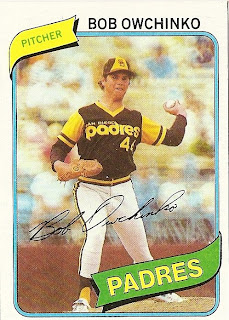 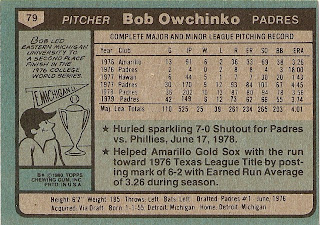 Who was this player?
Bob Owchinko, swingman, San Diego Padres
The left-handed Owchinko spent the 1979 season in and out of the Padres starting rotation and pitched well as both a starter and a reliever. During the offseason, Padre management decided to hire a new manager (Jerry Coleman) and there were many changes to the roster. Accordingly, he was traded to the Cleveland Indians. In his first American League season, he did not pitch well with an ERA hovering over 5.00. In 16 of his 29 appearances he allowed three or more runs.

A product of Eastern Michigan University, he was the star pitcher on an Eagles team that made back-to-back appearances in the College World Series. An unlikely baseball powerhouse, Owchinko led EMU to the finals of the 1976 College World Series. Some of Owchinko's collegiate exploits were covered in Roger Angell's classic work, Five Seasons.

During this same time, Owchinko was also drafted in the first round (5th overall pick) by the San Diego Padres. Before 1976 was over, he was already pitching in the major leagues. He began the 1977 season in the minor leagues, but when he quickly won five of six starts, he was recalled to San Diego and was inserted into the starting rotation. His best start of the season came when he two-hit the eventual NL Champion Dodgers. He won nine games and his ERA was rarely under 4.00 but his performance was strong enough to earn a spot on the Padres pitching staff for 1978.

That year, Owchinko achieved career highs in wins, starts, complete games and innings pitched. He was the #3 starter on a Padre staff behind Gaylord Perry (who won the Cy Young that season) and Randy Jones (NL Cy Young winner in 1976). After his lost season in Cleveland, he was traded twice; first in December 1980 as part of a package to the Pittsburgh Pirates for Bert Blyleven and four months later to the Oakland Athletics. He joined the A's just in time for their historic 11-0 start to the 1981 season and was part of an unheralded bullpen that won the AL West. Owchinko appeared in the post-season for the only time in his career that year, pitching in the ALCS in the A's loss to the New York Yankees.

He spent 1982 in Oakland as well appearing in 54 games, but his ERA was over 5.00 and he was released. He spent all (save one game) of 1983 in the minor leagues but returned to the major leagues, now with Cincinnati, in 1984 again as a relief pitcher. The 1985 season was spent completely in the minor leagues and he appeared in only three games with Montreal in 1986. After the season, his 10-year career came to an end. Today, Owchinko lives in the Arizona area and is a representative with Media Recovery, a data storage company.

Why I love this card
No, not because of the complete view of the Padres uniform in this shot. I remember being outside of the 7-11 near my house and opening the cards in the store with a group of friends. I didn't get the Owchinko card but one of my buddies did. Invariably, a bunch of 8-year old started making fun of his name. Apparently this stuck a nerve with the 7-11 clerk who was the son of the owner (who we knew as Buster). He screamed at us to quit making "stupid ass noises" and leave the store. We found out later that they somehow knew someone in the Owchinko family (since they were from Michigan and our general area) and Buster's son got mad at us. Whatever.

Something else....
Not that I am a fan of the airbrushing that took place in some previous Topps offerings, but here is another card of a player that did not play or finish 1980 with the team he is pictured with. That makes 22 cards out of the first 79 (28%). I don't recall this being so prevelant when I was collecting, but then again, I don't think that I was paying that close attention, either.
Posted by Dean Family at 8:44 AM