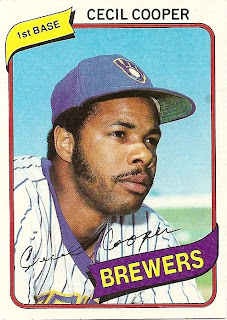 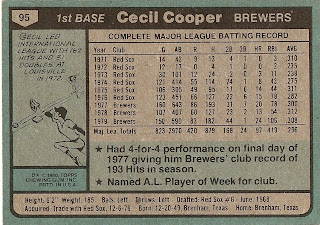 Who is this player?
Cecil Cooper, first baseman, Milwaukee Brewers
At the exact moment this card was new in packs, Cecil Cooper was likely the best first baseman in the game. While Cooper had a breakout season in 1979, he reached his zeinith in 1980. Not only did Cecil win the Gold Glove, Silver Slugger and get selected to the All-Star Game, he led his league in RBI and total bases. He also had the best batting average in the game in 1980 (.352) for someone not named Brett. Cecil Cooper had arrived in 1980 as one of the major offensive forces in Major League Baseball.

Currently the manager of the Houston Astros, the left-handed hitting Cooper was a selection in the 1968 amateur draft of the Boston Red Sox. He was a career .327 hitter in parts of six minor league seasons, but he found his path to the majors blocked by Red Sox first basemen George Scott and Carl Yastrzemski. His bat was too good to be left out of the lineup and he made the Red Sox roster primarily as their designated hitter. He resumed that role the following season as Boston won the American League pennant, primarily as the Red Sox leadoff man. When his batting average dropped almost 25 points in 1976, Cooper was traded to the Milwaukee Brewers - ironically for George Scott. It would be the biggest break of his career.

In his first year in Milwaukee, he appeared in 160 games and batted .300, beginning a streak of seven straight seasons with a .300 average. He earned his first All Star selection and Gold Glove award in 1979 and led the league with 44 doubles. He also had his first 100 RBI campaign. By 1981, Cooper and the Brewers were terrorizing baseball as one of the premier offensive teams in the league. Cecil more than held up his end as the Brewers made the postseason in 1981 & 1982. As part of "Harvey's Wallbangers" in 1982, he started the All Star Game and had a career-high 32 home runs. He also clanged 205 hits, 121 RBI and 104 runs scored. Milwaukee finished one game short of a championship in 1982, falling in seven games to the St. Louis Cardinals.

Cooper led league in RBI for a second time in 1983 and was recognized as the winner of the Roberto Clemente Award. He remained an offensive force for the Brewers even as the team slipped. He was elected to the All Star Game for the fifth and final time in 1985 when he hit .293 and drove in 99 runs. Two years later, at the age of 37, he played his final game with the Brewers. In his 17 year career, he had three 200-hit seasons, 4 100-RBI seasons and nine seasons hitting .300 or better. To this day, his named is scattered on the franchise leaderboard as their fourth all time hitter, and third in most categories, behind only Hall of Famers Paul Molitor and Robin Yount.

Following his active career, Cooper first worked as a player agent. In the late 1990s, he was named the Milwaukee Brewers' Farm Director. In 2002, he was a coach with the Brewers coinciding with the election to the team's Wall of Fame. He became a manager for the first time in 2003 with the Indianapolis Indians and in 2005 was named a coach with the Houston Astros, the season the team won the National League pennant. He was named manager of the team when Phil Garner was fired in 2007.

Something else....
No post about Cooper would be complete without a mention of his batting stance. Simply put, one of my most favorite ever, and one that every kid in the neighborhood could emulate. Between Cooper, Rod Carew and Pete Rose you had some of the most distinctive batting stances ever. I don't think that there is anyone in the game today with stances like them.
Posted by Dean Family at 10:25 PM