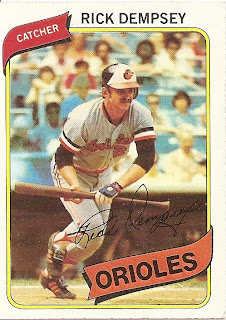 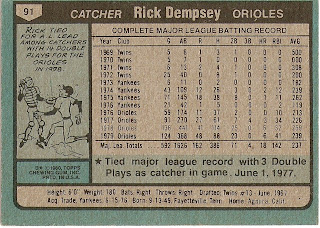 Who is this player?
Rick Dempsey, catcher, Baltimore Orioles
The starting catcher for the defending AL Champions, Dempsey was a popular player in Baltimore as much for his take-charge attitude as for his playful demeanor. In 1979, he led the AL in assists but was also a highlight-reel staple for his rain-delay performances. When the Orioles began slowly in 1980, Dempsey was briefly relegated to the bench and demanded to be traded. He raised his average nearly 30 points and the Orioles won 100 games, yet they were narrowly edged in the AL East race by the New York Yankees.

The son of vaudeville entertainers, Dempsey had a 24-year major league career and is one of only three catchers (McCarver, Fisk) to have played in four decades. Orignally drafted by the Minnesota Twins, Rick appeared in only a handful of games over four seasons. At the end of the 1972 season, he was shipped to the New York Yankees where he served primarily as a backup for Thurman Munson. He got his big break in 1976 when he was involved in a 10-player trade that brought him to Baltimore.

As an Oriole, he would be the starting catcher for the next ten seasons. The highlight was undoubtedly the 1983 World Series in which Dempsey was named the MVP. He had the game-winning RBI in Game Two and homered and doubled in the Game Five clincher, hitting .385 overall. Curiously, Dempsey is the only player to be named Series MVP despite having been pinch-hit for twice.

Dempsey is widely remembered for entertaining the crowds during rain delays. He sometimes wore his underpants over his uniform, making fun of teammate Jim Palmer’s advertisements for Jockey, mimicked Babe Ruth and once in 1982 at Milwaukee when he wore a Robin Yount jersey and mimicked hitting a home run complete with a rain-soaked belly flop at home plate. He then often led the crowd in a rendition of “Raindrops Keep Falling on My Head.”

He left the Orioles and signed as a free agent with the Cleveland Indians in 1987. He suffered and injury in a home-plate collision and also had elbow surgery. He signed with the Los Angeles Dodgers as a backup in 1988 as the Dodgers went to the World Series. An injury to starter Mike Scoscia saw Dempsey catch the final two games of Los Angeles' World Series championship. He would spend three seasons in LA and one in Milwaukee before finishing his career as an Oriole in 1992.

Why I love this card
A catcher bunting. Haven't seen this since Jake Taylor in Major League. Dempsey is also the uncle of former major league catcher Gregg Zaun.

Something else....
A later memory of Dempsey, Friday, September 20, 1991. Tiger Stadium. At the conclusion of the game, Dempsey is signing autographs for the fans sitting along the bullpen. Here's mine. There are not many and we persuade our friend Harry (always carried a memo pad and pen) to get an autograph. Not being a collector of anything baseball, he does so at our prodding. An hour later we are going back to the campus of the University of Detroit and Harry does not have his parking pass. We briefly freak until Harry provides the solution and clips his Dempsey autograph to his rear view mirror. The guard lets us pass. What was really funny is that Harry used it for the remainder of the fall term without incident.
Posted by Dean Family at 6:01 PM