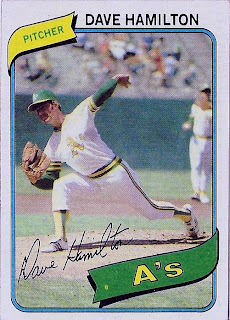 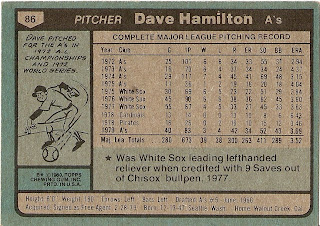 Who is this player?
Dave Hamilton, relief pitcher, Oakland A's
A member of the A's "Mustache Gang" of the early-1970s, Hamilton had returned to Oakland in 1979, primarily as a lefthanded relief pitcher. His 3.70 ERA in '79 was the best on the club, a full run under the team's average. However, the A's had lost 108 games that season and there were rumors of a move to Denver. It was expected that Hamilton would fill a similar role in 1980 but injuries and ineffectiveness led to the worst season of his career. After the season, he did not appear in another major league game ending a nine-year career.

When Hamilton broke into the majors in 1972, it was a much different story in Oakland as the A's were beginning their reign as kings of the baseball world. In the early part of 1972, the A's starting rotation was in disarray as Vida Blue was holding out and veteran Denny McLain was not pitching well. Hamilton was inserted into the rotation and he promptly won five of his first six decisions. While he didn't maintain that level of success, he helped lead the A's to their first World Championship, pitching in the ALCS and the World Series. It was the A's first title since the club moved to Oakland.

Hamilton was the fifth starter on the A's in 1973 winning six games in 11 starts. He moved up to the fourth starter in 1974, winning seven in 18 starts. While he was on the playoff and World Series roster both seasons, he did not appear in the postseason. However, when the A's lost Catfish Hunter following their third championship, Hamilton's career was indirectly effected.

Desperate for veteran pitching, in 1975, A's owner Charlie Finley traded Hamilton and prospect Chet Lemon to the Chicago White Sox for Stan Bahnsen. The following season, he pitched out of the bullpen as the Sox' closer as Chicago experimented with Goose Gossage in the starting rotation. He was effective as a setup man for the 1977 "South Side Hitmen" one of the more popular teams in White Sox history, but as that team was dismantled in the dawning days of free agency, Hamilton was shown the door as well, traded to the Cardinals. He split the 1978 season between St. Louis and Pittsburgh before returning to Oakland as a free agent in 1979.

In retirement, Hamilton still continued to play the game and shared his knowledge as coach for many years at California High School in San Ramon, California.

Why I love this card
Not until I researched this card did I even realize that Hamilton earned three rings with the "Swingin' A's" and was with them through their glory years. I guess that the 1980 set is still teaching me something new 29 years later.

Something else.....
The A's farm system of the late 1960's and early 1970's produced many major leaguers among them Hamilton. In fact, on Hamilton's first professional team the 1966 Lewiston Broncs, he was teammates with another player on his first professional team, Reggie Jackson. This is also Hamilton's final baseball card of his career.
Posted by Dean Family at 11:44 PM