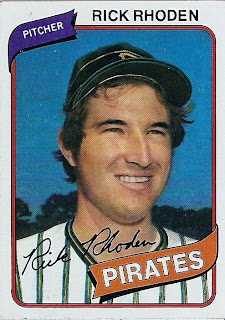 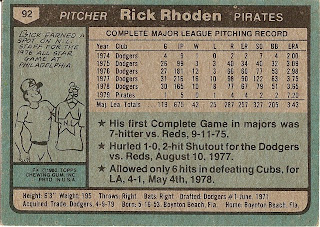 Who is this player?
Rick Rhoden, pitcher, Pittsburgh Pirates
Traded for Jerry Reuss at the start of the 1979 season, Rick Rhoden pitched in only one game in 1979. Sidelined by a bone spur in his right shoulder, Rhoden became a forgotten member of the 1979 World Champions. Fully healed in 1980, he was the #5 starter on the Pirates, winning seven games and finishing the year with a 3.84 ERA.

As a youngster, Rick Rhoden went on a slip and slide and impaled his knee on a pair of rusty scissors. He then developed symptoms of osteomyelitis. He used a cane to walk with until the age of 12 and underwent an operation to remove part of his left knee so that it would not outgrow his right one. Rhoden became a pitcher when he could not run fast and found his calling. He excelled in high school and was drafted by the Los Angeles Dodgers. After a few seasons in the minors, he was promoted in 1974.

He made the Dodgers out of Spring Training for good in 1975, altrnating between the bullpen and starting rotation. The following year, he went 8-0 in the first half and earned his first All Star selection. In 1977 and 1978, Rick won 26 games as the Dodgers were back-to-back National League champions. He appeared in the NLCS both seasons and pitched in Game 4 of the 1977 World Series.

Rhoden would spend 8 seasons in Pittsburgh, a bright star at time when the franchise was at its lowest depths. A reliable starting pitcher, Rhoden was also valuable with the bat as he won three Silver Slugger Awards. In 1984, he put together an 11-game hit streak, the longest ever for a pitcher. In a Pirate uniform, Rick batted .251 with 5HR and 48RBI, which was typically better than the Pirate shortstops of that era. He was elected to the All Star Game again in 1986 and his 15-win, 2.84 ERA season placed him fifth in the Cy Young voting that year.

Unable to pay him, the Bucs traded him to the Yankees in 1987, where he won 11 games in the first half. He stayed with New York for two seasons before he was traded to the Houston Astros where he finished his 16-year career in 1989. Since retiring, Rhoden found a second career in golf. He has qualified for the United States Senior Open, and has become a dominant player on the Celebrity Players Tour. Most recently, he won the American Century Championship for the eighth time.

Why I love this card
An Oriole and a Pirate in back to back cards. Nice 1979 Series reference, even if it was unintentional. Also, I am fairly certain that Rhoden's card is airbrushed. He was traded to Pittsburgh in April 1979 and only appeared in one game so there weren't many opporunities to get him photographed as a Buc. Then again, Topps can airbrush Rhoden, but not some of the more obvious player moves (LeFlore, Ruppert Jones, et. al.)?

Something else....
On June 11, 1988, New York Yankees manager Billy Martin made him the Yankees' starting designated hitter, going 0-1 with an RBI on a sacrifice fly. He batted 7th in the lineup, ahead of Rafael Santana and Joel Skinner. He was the first pitcher to start a game at DH since the AL's adoption of the DH rule in 1973.
Posted by Dean Family at 12:44 PM