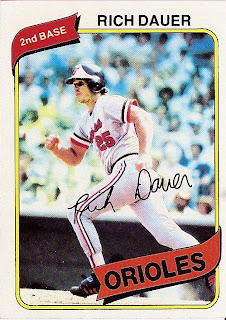 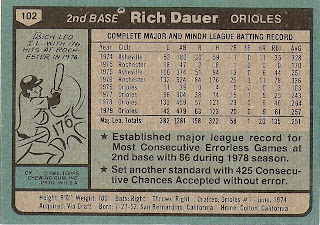 Who was this player?
Rich Dauer, second baseman, Baltimore Orioles
The regular second sacker for the defending AL Champions, in 1980 Dauer was in the midst of his finest offensive season. An exceptional fielder, he was the toughest player in the American League to strike out. Alternating between the second and ninth spot in the batting order, Dauer achieved career highs in hits, RBI and games played. A stabilizing influence in the lineup and in the field, Dauer was one of the most valuable (and unheralded) Orioles during this period.

An All-American with a USC team that won the 1974 College World Series, Rich Dauer was drafted three times before he signed his first professional contract. As a member of the Rochester Red Wings of the Oriole organization, Dauer shared the 1976 International League MVP award when he batted .336. Called up to the Orioles in September, he singled in his first at bat, but stuggled thereafter, going going 4 for 39 the rest of the way.

Dauer spent most of 1977 as a backup infielder before winning the second base position for good in 1978. Despite raising his batting average nearly 20 points, Dauer earned headlines for his fielding. He established a major league record for going 86 games without an error and handling 425 consecutive chances flawlessly. In 1979, he earned his first postseason appearance as the Orioles made it all the way to the World Series. Dauer showed his ability to hit in the clutch as when he hit a home run in Game 7 that gave Baltimore a brief lead. The Orioles would eventually fall to the Pittsburgh Pirates.

In 1981, Dauer would again be the toughest hitter in the AL to strike out in addition to leading his league in fielding. He topped the Orioles in doubles and finished with a .263 batting average. While not as known as some of his more famous teammates, Dauer was a player that did all the proverbial "little things" that helped a team win. He appeared in 158 games and batted .280 in 1982, a season that saw the Orioles challenge for the division title, losing on the final day of the season.

Even though his batting average tumbled 45 points in 1983, that season was special for Dauer and the O's as Baltimore won the World Series. That season, Dauer and teammates Todd Cruz and Rick Dempsey were affectionately known as the "Three Stooges," and Dauer had a three-hit, three-RBI performance in a Game Four win. Rich would be the regular second baseman for the Orioles for one more season (1984) and played his final season in 1985, wrapping up a 10 year career.

Why I love this card
The eye black that Dauer is wearing in this card. Though fairly common in 1980, I don't think anybody wore as much as Dauer is in this card. As a kid, this was always something that "real" ballplayers did. Don't know why we thought that, but it was definately part of the image. Do players even wear eye black anymore?

Something else....
Like most players, Dauer stayed in baseball after his playing days. He was the third base coach for the 1990-91 Cleveland Indians, and Kansas City Royals from 1997-2002. He was the Milwaukee Brewers bench coach from 2003-05 and the Colorado Rockies minor league infield coordinator from 2006-08. He is currently the third base coach of the Rockies. Some of his handiwork can be seen here, here and here.
Posted by Dean Family at 11:55 PM