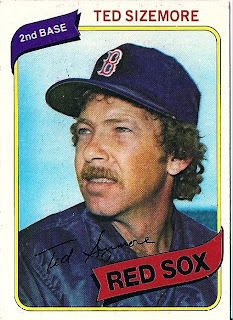 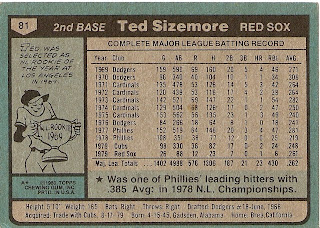 Who is this player?
Ted Sizemore, utility player, Boston Red Sox
Traded twice during the 1979 season, Sizemore had the unique distinction of being in uniform when two players achieved their 3000th hit during that season. Sizemore began a tumultous 1979 as a Chicago Cub and was traded to the Boston Red Sox when Jerry Remy was injured. He was a utility infielder with the Red Sox with Remy healthy and he played in only nine games in 1980 before he was released. His 12-year career had come to an end.

Raised in Detroit, Sizemore was a prep star that went to the University of Michigan on an athletic scholarship. He was the All-Big Ten catcher in 1965 and 1966 and attracted the attention of the Los Angeles Dodgers, who drafted him. While he did well in the minor leagues, the Dodgers converted him into an infielder because they felt that he was too small for the position. The move worked, as Sizemore played in 159 games in 1969 (mostly at second base) and was named the NL's Rookie of the Year.

With a loaded minor league system, the Dodgers could afford to deal Sizemore. A loadedtrade was made with the St. Louis Cardinals after the 1970 season for slugger Dick Allen.

In St. Louis, Sizemore would be a constant at second base for five seasons. He developed a reputation as a scrappy player that specialized in the "little things" that would help a team win. In fact, when teammate Lou Brock set the single-season record for stolen bases in 1974, he credited Sizemore's contributions as #2 hitter as a key factor. Additionally, he lead his league in sacrifice hits in 1973 and finished second in that category in 1975. Even though he was a solid performer in St. Louis, the Dodgers traded for him in Spring Training of 1976.

Mainly acquired as an insurance policy when Davey Lopes missed the first month of 1976 due to injury, Sizemore played in the fewest games of his career and was unhappy in doing so. After the season, the Dodgers traded him to the Phillies. With Philadelphia, he replaced the departed Dave Cash on the team that won the NL East in 1977 and 1978. Even though Sizemore batted a over .300 in his only two postseason series', the Phillies lost the NLCS both years to the Los Angeles Dodgers. In 1979, the Phillies acquired Pete Rose via free agency and there was some thought to Mike Schmidt being moved to second base. Sizemore was unhappy at this proposition and said so in the press. Instead he was traded to the Cubs in a move that brought Manny Trillo to Philadelphia.

Why I love this card
Third card in a row to feature a guy with ties to my general area growing up. Sizemore starred at Detroit Pershing High School, roughly a half hour from my house. LeFlore grew up on the east side of Detroit, about a half hour in the other direction. Owchinko was born in Detroit went to school in the area. Knowing that major leaguers were born, grew up and went to school in the vicinity personalized them a little bit more and made collecting their cards that much more fun.

Something else....
In retirement from baseball, Sizemore has been working with the Rawlings Sporting Goods Company as Senior Vice President, Baseball Affairs, Worldwide.
Posted by Dean Family at 4:43 PM