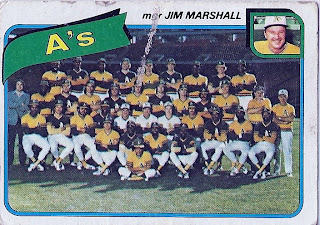 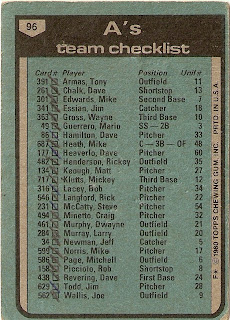 The team pictured here, the 1979 Oakland A's had just completed one of the worst seasons in major league history. They had lost 108 games, were almost relocated to New Orleans, and drew a meager 306,763 the entire season. Even more amazing, they drew only 653 for one early-April game. Their owner, Charlie Finley, was one of the most disliked men in sports at the time. Marshall was a former manager of the Chicago Cubs that was hired shortly before the 1979 season began.

During the winter of 1979-80, rumors were still rampant that the A's would move, this time to Denver. In an effort to give his club value, Finley hired Billy Martin as manager. Martin, along with a core of young players, turned things around in Oakland almost immediately. There style of play was deemed "Billyball." A good video of the A's during this era can be seen here.

Led by a group of young pitchers and a future Hall of Famer Rickey Henderson, the A's roared out of the gate in 1980, winning seven in a row in April. They finished the month in first place and only 2.5 back as June began. However, a summer swoon and a weak hitting infield returned the A's to the middle of the pack. Nevertheless, the A's finished with a winning record and the groundwork was there for Oakland to build on. Finley meanwhile, sold the team in August, 1980.

Henderson, in only his second season, set the American League record for stolen bases in a season (100), breaking a record set by Ty Cobb 65 years previously. It would be foreshadowing of what was to come in Rickey's career. Teamed with the slick-fielding Dwayne Murphy and the power-hitting Tony Armas, the A's suddenly had one of the best outfields in baseball. Murphy had won his first of six Gold Gloves in 1980 and Armas led the team with 35 home runs and 109 RBI.

Mike Norris led the pitchers with an outstanding 22-9 season. He would finish second in the Cy Young voting and also won a Gold Glove. He was supported by the durable Rick Langford, who won 19 games and completed 22 starts in row. Matt Keough was the #3 starter, and he also won 16 games with a 2.92 ERA and 20 complete games. The A's rotation was so reliable that their bullpen only recorded 13 saves the entire year.

Why I love this card
I love team photos. There are very few historical records of the bad teams in baseball history and this card is a reminder of that 1979 team. I also like the alternating yellow and green jerseys the players wore, it adds a bit of liveliness to an otherwise mundane team. Also, fortuitous timing that Rickey Henderson's first team would be featured on the day he gets inducted into the Hall of Fame.

Something else....
It truly is amazing what the 1980 A's accomplished. If you take their outfield and starting rotation out of the mix, the rest of the team contributed very little to the overall team effort. Billy Martin is renowned for his managerial abilities (albeit short term) and nowhere is that more evident than with the 1980 A's. To wit, 94 complete games. Think about that. 94. In the age of pitch counts and setup men, we will never see that again. Not even close.
Posted by Dean Family at 3:54 PM