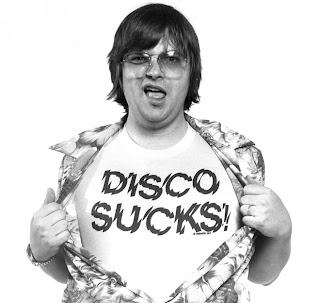 Please allow me to step away from the 1980 set for a moment to recognize an Anniversary.

Today is the 30th Anniversary of Disco Demolition Night. The product of Chicago DJ Steve Dahl and White Sox promotion man Mike Veeck, the infamous promotion was staged between games of a Tigers-White Sox doubleheader.

I remember watching this on television in Detroit when this happened. As a youngster, I had absolutely no clue what the hell was going on. My Dad was at a loss to explain what was happening as well, since it was completely unprecedented.

Everyone knows the story by now, but there were some good articles this week looking back:

I know that I have posted this before, but here again is the coverage as it happened
Posted by Dean Family at 7:39 AM