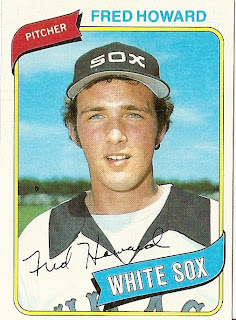 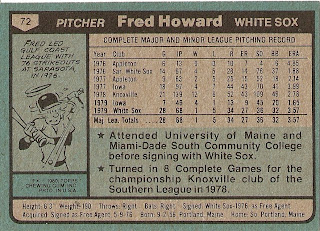 Who was this player?
Fred Howard, relief pitcher, Chicago White Sox.
Howard's only season in the major leagues was 1979. Called up in late May, he started a few games before being sent to the bullpen. He remained with the White Sox through September and although he appeared on the Sox 40-man roster in 1980, he did not make the team out of Spring Training.

Originally a product of the University of Maine, Fred Howard was drafted by the White Sox in 1976. During this time, the Sox were accumulating a collection of young pitchers, many of whom would help lead the White Sox to a division title in 1983. However, in the late 1970s, Howard was one of many trying to earn a spot on the White Sox pitching staff. Some of his minor league competition were fellow major leaguers Ross Baumgarten, Steve Trout, Dave Frost, Britt Burns, Rich Dotson and LaMarr Hoyt.

This influx of talent did not prevent Howard from pitching well in the minors and all of these pitchers made their major league debuts about the same time. Howard's came on May 26, 1979 against the California Angels. He earned his win a couple of weeks later against the Milwaukee Brewers.

Perhaps Howard's most infamous moment game on July 12th as the starting pitcher of the first game of a doubleheader against the Detroit Tigers. These games became noteworthy as they were part of Disco Demolition Night. He also pitched in what would be Thurman Munson's final game before a tragic plane crash a few days later. He finished his only major league season 1-5 in 28 appearances with a respectable 3.57 ERA.

Howard pitched in the minors for a few more years in the early 1980s before giving up baseball for good. After his playing days, Howard went to medical school, graduating from University of Missouri, Columbia School of Medicine in 1996. He is currently a surgeon at the Gessler Clinic in Winter Haven, Florida.

Why I love this card
Howard is a little like the Moonlight Graham of the 1980 set. The fact that he reached the top of not one, but two professions is really cool. Maybe not as cool as the lapel collars the White Sox were sporting at this time, but cool nonetheless.

Something else....
The Disco Demolition link earlier in this post likely contains one of the only recordings of Howard in action. It comes at about the 2:35 mark with a young Greg Gumbel commentating. This card is also our second straight DP card.
Posted by Dean Family at 9:43 AM